Dialogue has started in earnest between Wellesley Public Schools and the Natural Resources Commission (NRC) regarding the possibility of lights at the high school track and field.

The School Committee’s Linda Chow gave an overview of the proposal at the Nov. 18 NRC meeting, which devoted more than 2 hours to the topic, following related discussion about restroom and team rooms (view Wellesley Media recording starting at about the 1-hour mark). The introduction of lighting would require a land use change of the NRC’s Hunnewell track & field property that raises questions about its impact on natural resources and the neighborhood, as well as the financial costs of doing so. 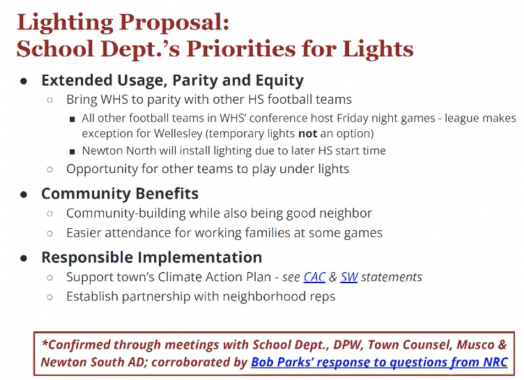 Even if the NRC gives the plan its blessing, that only kicks off a process that will involve meetings with a bunch of other Wellesley boards etc, and fundraising campaigns to pay for the lights as well as team rooms and a new sound system. The issue has already been the subject of numerous NRC, School Committee, and Playing Fields Task Force meetings. The NRC in January started the year with a lights discussion.

Chow at the Nov. 18 NRC meeting introduced a parade of consultants who discussed everything from the latest in lighting techniques designed to illuminate fields without burning neighbors or causing light pollution to sound systems that direct noise the fields and fans at a relatively low 78 decibels (“governor” technology would keep overenthusiastic students from cranking up the tunes and shaking foundations with booming bass). Among the consultants was 1 that worked with Wellesley College when it lit up its track and field a number of years back. 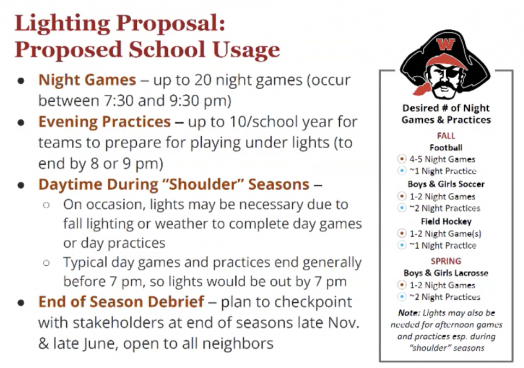 Cost estimates include $130K for sound, $400K-$450K to install the lighting system and another $3K yearly to run them.

“I hope that folks see that we certainly have tried our best to try and address and come up with steps to mitigate the impact on all these various criteria,” Chow said, noting that next steps would include addressing any NRC questions.

The lighting team has held individual and group meetings with neighbors and conducted a survey to get their input. End-of-season debriefings would also be part of the plan. Chow said firming up any changes to the lighting usage policy will be key, providing assurances about things such as the maximum number of games allowed under the lights.

Still, some neighbors aren’t convinced lights are a good idea, that they aren’t very neighborly in an area where they say homes are much closer to the field than in other communities. They also worry that initial limits on use could be loosened over time, creating a slippery slope situation. One neighbor made his comments during the NRC meeting from his mostly dark driveway (aside from tennis court lights) to help make a point about how quiet and light-free it usually is around there at night. Another speaker ticked off a list of questions or issues she’d like to see addressed more thoroughly, including how night-time use of the field will be divvied up between boys and girls teams. And another asked the NRC if allowing lights is truly in line with its mission.

Those in support of the lights argue that they will enable more community-wide events, something they says is increasingly important in light of the pandemic forcing so many people part over the past 2 years. Others cited the ability of lights to bring Wellesley up to par with other nearby communities, allowing Wellesley High to host playoff games at night, preventing student-athletes from skipping out of school early for practice, and making it easier for parents and guardians to see kids play sports. Proponents also point to a petition signed by nearly 4,300 resident who want the lights and a thorough study by a Playing Fields Task Force subcommittee. They emphasize, too, that the lights proposed are energy efficient to the point where they won’t have much of an impact on the environment.

NRC Chair Raina McManus started off discussion among commissioners by referencing the recent history of the track and field, including a renovation conceived 7 years ago. Compromises were made at the time, allowing for artificial turf (“not the best environmental choice”) to support more use and assurances during a public hearing that lighting wouldn’t be part of the project, she said. As the issue of lighting is now revisited, she said: “The question we’ll eventually have at hand is this: ‘Can there be any scenario that balances all interests?'”

Commissioners said they had pages of questions about the situation based on correspondence from the public and the NRC meeting presentations, so they attempted to get some of those answered that night and would work to consolidate the rest for follow-up.

Many questions focused on what exactly neighbors might see from their yards in terms of new light, and whether it would even be noticeable vs. existing street lights.

Among the requests from McManus was to get something set up at the field that would mimic the 80-foot high light arrays so that people can get a sense of what the 4 proposed light poles would look like regardless of whether the lights are on.

The lighting group will digest the NRC questions and return to continue the discussion, possibly as soon as early December.