Wellesley isn’t alone in the state in seeing a spike in COVID-19 cases as people return from Thanksgiving gatherings and increasingly take part in other indoor activities, but the numbers—and the rise of the Omicron variant—have prompted town leaders to boost their messaging about staying vigilant to offset “COVID fatigue.” 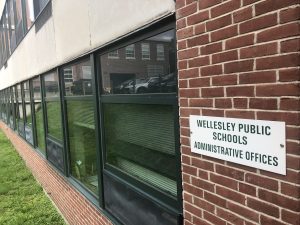 Wellesley Public Schools Supt. Dr. David Lussier and Director of Nursing Services Ashley Hulme at the end of last week issued a memo to the school community in which they wrote:

We have seen a sharp increase in the number of confirmed cases in WPS this week with 23  as of this writing.  These cases represent Fiske, Hardy, Hunnewell, Schofield, Upham, WMS, WHS, PAWS, and Central Office. 14 are student cases and 9 are staff cases.  There were 2 positive pools from surveillance testing this week.  For the first time this year, we believe we have one instance of in-school transmission between two students at WMS, which we will be further investigating.

We can appreciate that there is “COVID fatigue” right now on many fronts, but we also know that we must remain vigilant in adhering to the mitigation measures that have allowed us to return to many aspects of in-person education in WPS.  With a surge in new cases throughout Massachusetts and more indoor activity occurring as result of colder weather and the holiday season, let’s continue to follow the practices that we know work…”

Cases are updated daily on the District COVID-19 Dashboard.

WPS also gave an update on staff vaccination rates, which range from 83% at Wellesley Middle School to 98% at Bates Elementary School. The school system took some heat early on when rates were first revealed, but has shown much higher rates as more staff have responded to a school survey on their vaccination status.

They wrote that at the end of last week it was learned that a member of the Child Lab staff had COVID symptoms and was confirmed positive over the weekend. Two students were sent home with illness, one who tested negative and one who is awaiting results. A separate student has since tested positive and others have symptoms.

The lab situation is of broader concern in that both students of faculty and staff from the district as well as town residents attend. It’s also part of the Wellesley High curriculum, so students participate at the lab as part of their coursework. Contact tracing is taking place both within the school and wider community.

At this time we do not yet know exactly how many individuals are close contacts but the number of days required for quarantining unvaccinated children was another reason we have made the decision to keep Child Lab closed through the end of the week.  We have already written with updated information to the families of all our young students and our high school students.   If there is further information we need to share with the community we will certainly be in touch.

Clearly this is a moment with local cases on the rise where we need to be practicing our personal safety measures with great fidelity.  At the high school we will be redoubling our efforts to make sure students are wearing their masks properly.   We are also re-opening a third of the gym so students can further spread out during lunch time.

Additionally, in conjunction with the Wellesley Health Department, we have made a decision that all Athletic contests and Performing Arts Concerts this week being held at the high school will be at 50% capacity only.  We are trying to prioritize families at those events.  Specific additional messaging will be coming from those departments. 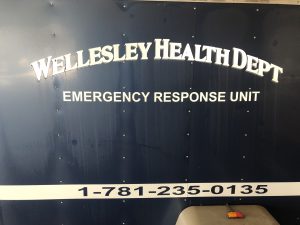 Across town, COVID-19 cases have about doubled on a daily basis of late, according to Ann Marie McCauley, the town’s public health nurse supervisor. She said during this past week’s Board of Health meeting, that “since Thanksgiving we’ve seen a significant increase in cases… honestly, a doubling.” That’s a rise from 3 or 4 cases a day to 7 or 8, McCauley said, and she suspects the numbers might even be higher.

The town has seen no pattern with the cases, with COVID striking those across age groups. Board of Health member Dr. Marcia Testa-Simonson says the rise isn’t shocking given that infectious disease cases naturally increase at this time of year, peaking in January, as people spend more time indoors and in drier conditions.

In light of the uglier numbers, the town is strongly advising that individuals over the age of 5 wear a mask that covers the nose and mouth when indoors in a public setting, regardless of their vaccination status. An emergency order requiring masks when indoors in Wellesley municipal buildings remains in effect.

The state is making moves to address the COVID-19 spike as well, announcing Monday that it will be distributing 2 million free rapid tests to Massachusetts’ 100 hardest hit communities. It’s also working to deliver more free or low cost tests across the state, Gov. Charlie Baker said.

And then there’s Norovirus

Meanwhile, back in Wellesley, it isn’t just COVID or seasonal flu or colds that the town is worried about. It has also detected “a few suspect norovirus cases in town…,” Senior Environmental Health Specialist Vivien Zeng said during the Board of Health meeting, referring to norovirus as seasonal and virulent. “We’re treating it as a noro outbreak.”

Those operating food establishments in town have COVID-19 safety protocols “burned into their mind,” she said, but norovirus is a different animal and requires attention to hand washing and not touching things. The Health Department declined to get into any specifics about where it was detecting norovirus.