Bias reporting system is back

Supt. Dr. David Lussier recently temporarily rescinded the school system’s bias-based reporting procedures, which are designed to protect students and staff but have come under fire by some in the school community for being too broad. WPS reviewed its procedures to ensure they sync up with recent case law.

The amended procedures are now posted. Though you need special access to see the reporting form.

Vaccination rates for Wellesley Public School staff revealed at the Nov. 16 School Committee meeting (see 2-hour, 44-minute mark of Wellesley Media recording) disappointed many in the school community. The Board of Health had questions, too.

Though school officials stressed that the numbers reported are based on those who responded to surveys. If someone hadn’t responded yet, they were marked as unvaccinated for now. Without a vaccination mandate, it’s really difficult to get complete numbers, said Director of Nursing Ashley Hulme.

Hulme said at that meeting 70.4% of its staff at Wellesley High (including teachers, administration, facilities, food service, etc.) was fully vaccinated against COVID-19, according to a survey sent in September (Lussier clarified that among the teachers and administrators at the school, the number was much higher than 70.4%).  She added that 85% of the 1,400 students were fully vaccinated, that made for 82.9% of the total population being fully vaxxed.  Only 50% of staff at the Middle School was reported as being fully vaxxed.

Since that meeting the schools have put on what Lussier described as a “full-court press” to get more people to fill out the survey.

In revealing updated numbers at the Nov. 30 School Committee meeting (see 19-minute mark of the Wellesley Media recording), Hulme started with “now doesn’t that look better everybody?” She praised the nursing staff for “encouraging” everyone to fill out the survey on vaccination status. 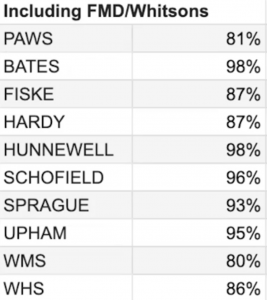 The numbers will only go up from here as more people report, since those who haven’t reported are currently marked as unvaccinated.

The state’s Department of Elementary and Secondary Education has extended a masking mandate at public schools through Jan. 15, though some districts are applying for waivers to drop the mandate based on high vaccination numbers.

The week before Thanksgiving was the school system’s last getting assistance from the National Guard in running the COVID-19 surveillance testing program at the schools. The Guard played a key role assisting the schools in light of state resources not coming through as originally promised, Lussier said. “Our state partner has been incredibly inconsistent in providing staff and having staff show up on time,” he said, noting that consistency is key in that pulling kids out of classes to get swabbed has to be choreographed precisely to avoid as much disruption to learning as is possible.

Nurses have been triaging as well as possible, Lussier said. In the meantime, the school system has lobbied for more support from the Guard, but may need to shift surveillance schedules without that help.