While the lawsuit settlement over affinity spaces and bias reporting grabbed headlines, the Wellesley School Committee meeting on Feb. 8 hit on other hot button issues as well. And not to be overlooked: It all took place in under an hour.

A pair of citizen speakers each raised important topics—field lights and masks—and both subjects were addressed later in the meeting by School Committee members or Wellesley Public School administrators.

Resident and former School Committee Member Sharon Gray, after watching the Feb. 3 Natural Resources Commission meeting (see 30 minutes in to Wellesley Media recording), shared her thoughts on the long-running Hunnewell Field lights proposal debate. The NRC devoted about two hours to the topic, which began with a line-up of residents mainly focused on the potential negative impacts of lights on wildlife, and included a slideshow from one resident showing examples of animals—from minks to herons—that reside in the area.

“My concern is that the process for making the decision remains very unclear even to those who have been following it closely,” Gray said, noting that two NRC members stated they were prepared to vote against the School Committee proposal.

During its meeting, the NRC agreed to continue discussing lights at its next meeting, as members debate the merits of a land use change for student-athletes and other park users vs. the  impact on neighbors and the environment.

Among Gray’s concerns is that the process continues to drag out, and that a public hearing hasn’t been held or scheduled. While there has been plenty of public feedback at NRC and other meetings since the NRC met with the School Committee a year ago, she said she’d like to see the NRC hold a public hearing. Gray said the community would also benefit from hearing the NRC and School Committee reunite and discuss the topic.

While the field lights wasn’t a formal agenda item, School Committee’s Linda Chow brought it up  during member reports. She’s been spearheading the lights effort from the School Committee side.

Chow said she was “a little unsure what the next steps are” after watching the latest NRC meeting. The idea of using temporary lights as a sort of pilot program has been raised by the NRC at its past couple of meetings, but Chow says the schools have looked at such a solution and found it “not to be a viable option.” She mentioned putting together a document on the school light team’s findings about this.

Meanwhile, the steady stream of public comments from neighbors and light opponents at NRC meetings hasn’t been lost on Chow. She said now would be a good time for those in favor of lights to share their voices with the NRC and School Committee.

The masking issue was raised on the night before the state’s Department of Elementary and Secondary Education said it was lifting the mask mandate for schools on Feb 28. Masks will still be required on buses per federal rules, and school districts will be able to implement local rules for classes and school activities. Wellesley Public School officials had stated before the announcement that they were hoping the indoor mask mandate would be lifted heading into March.

Resident Susan Calcio used her citizen speak time on Tuesday night to read portions of a letter signed by more than 500 Wellesley Public Schools parents and sent to the Board of Health, Health Department, School Committee, and WPS Supt. Dr. David Lussier. She said that parents “have grown increasingly concerned about the negative impact of ongoing COVID-19 school restrictions on our students” in an environment where so many are vaccinated and where the Omicron variant has resulted in mainly mild cases of COVID. 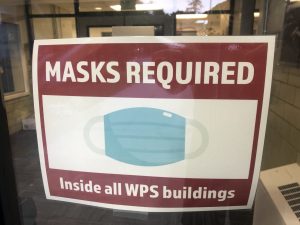 The parents asked the school system to revisit its agreement with the teachers’ union so that it can easily maneuver based on changing state rules, and to apply for a masking waiver in advance of that (a waiver will no longer be required come Feb. 28). The group supports the school system’s approach to at-home testing for symptomatic individuals, but also urges WPS to spell out the “scientific rationale supporting any remaining mitigation measures.”

Supt. Lussier, in his COVID update, pointed to continually falling case rates and improving vaccination rates, and based on conversations with the Health Department, said “we all do believe that the conditions do represent an opportunity to safely begin to relax some of the mitigation strategies, in fact many of them in place right now, including masks.”

As usual, one concern is what the school will run into with COVID cases following vacation week, which takes place right before the date of the mask mandate being lifted. That could mean pushing Wellesley’s mask mandate’s end here until March 7, Lussier said.

Other mitigation strategies, including social distancing at lunch, would also be considered as part of this review.

Masks would continue to be welcomed for those who want or need to wear them.