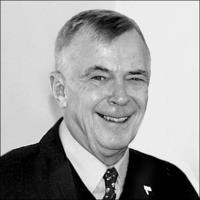 Gary T. Woods Of Wellesley, peacefully passed away on July 7 after an unexpected and brief illness at the age of 68. He leaves behind his loving wife Elizabeth (Beth) Sullivan; and his son James (Jimmy) Woods; a brother Greg Woods and his wife Jody; a sister Sabina Herlihy and her husband Walter; and a large clan of in-laws, nieces, nephews and cousins who loved him deeply.

Gary was born in Dorchester, MA to James and Catherine Woods as the middle of 5 children; and was predeceased by his parents; his oldest brother Kevin J. Woods; and his youngest sister Clare M. Woods. Gary was an avid reader, consuming three newspapers a day, and had a lifelong passion for learning and education. He enjoyed sharing his knowledge and igniting interest in all things STEM – from creating STEM learning modules for his son Jimmy’s classrooms each year at St. John’s School and other area secondary schools, to delivering professional training programs for calibration technicians and engineers so they could attain professional certification by ISPE.

Gary began his education at St. Brendan’s Elementary School in Dorchester. He graduated Lowell Technological Institute in 1975 with a BS in Chemical Engineering where his passion for Engineering was ignited. He continued his education at University of California (Bio-Medical Engineering), Naval Nuclear Propulsion School (Nuclear Engineering) in Idaho, and USMC Engineer School (Construction).  Gary was a licensed professional engineer in three disciplines: Chemical, Nuclear and Controls Systems. He was the founder and President of CrossPoint Engineering, an engineering services firm which has been providing high quality, customized process control and chemical engineering services to the power, specialty chemical, biotech and pharmaceutical industries for 30 years.

Prior to beginning his professional career, Gary was commissioned as a Marine Corps officer where he attained the rank of Major although he was proudest of serving as a Captain. After serving 18 months oversees in many countries, he was awarded a position as a series commander at MCRD in San Diego where he had the honor of leading 24 Drill Instructors for 2 years. After his active service, he continued for 9 years in the Marine Corps Reserves.

Gary continued his active interest in supporting the veterans through his involvement with the Wellesley Celebrations Committee. He was a Corporator of Dedham Savings Bank, a member of the Wianno Yacht Club, and a longtime member of the Algonquin Club of Boston; professional affiliations included ISA member, Certified ISA Instructor, a contributing and voting member of ASME-BPE, ISPE, and  AMA.

Gary’s greatest joy was spending time with his family and relaxing outside on a deck with a good book and a cup of coffee. He was always ready to take on new challenges with his son – canyoning, rock climbing, chess, and building all types of projects. His “can do” attitude, his empathy for others and his willingness to be there when he was needed will be deeply missed.

Services took place in mid-July in Wellesley. In lieu of flowers, donations may be made to the Wellesley Free Library –Director’s Fund, 530 Washington St., Wellesley, MA 02482 or the Mass General Hospital Cancer Center. For an online guestbook,  see gfdoherty.com.