It didn’t take me long to see why Wellesley Square mail carrier Toni Alexander might very well need all the way until “June 31” to finish her painting of an electrical box near the post office. I stopped by to take a few quick photos. An hour later, after a conversation that spanned from her clown friends to vintage belt buckles to clubbing in Boston back in the day…

Alexander took part in the town’s ongoing electrical box public art painting program, the application for which included a deadline for the mythical date of June 31 that I reference above. The town’s Public Art Committee approved Alexander’s proposed design, which features favorite pups from along her route, plus a cat named Rocket who adorns the top of the box, encircled by a compass. The box pays homage to these pets, both living and deceased.

The box location at Central Park, that patch of open space in front of the Wellesley Square post office, couldn’t be handier for Alexander, who dutifully painted for half-an-hour to an hour or so before work and after work, just minutes away. “It’s convenient—and shady,” she said. 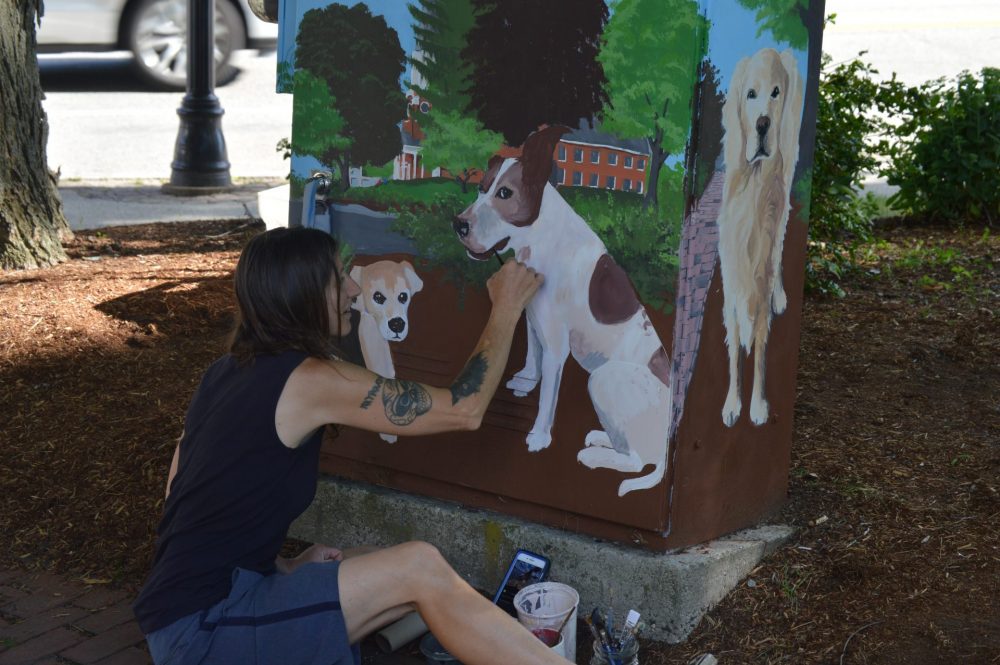 The box was nearly done on the afternoon I stopped by, but Alexander wasn’t quite satisfied with a number of critters, who she described in some cases as looking too cartoonish. She kept showing me pictures from her smartphone of the real animals so that I could compare and critique. The paintings looked pretty life-like to me. She relayed the story of one local dog owner stopping by after she heard that her pet Poppy was depicted on the box, and being “over the moon” about it.

Others dogs immortalized include Pi, Nola, Cisco, Cooper, and Sammy. The original plan was to devote the painting to Pi in a “Pi-casso”-style, Alexander posted online, but she figured that approach wouldn’t have been community-focused enough to qualify.

Alexander didn’t get a lot of brush strokes in while I was there. Moments after I arrived, a mom and daughter on the way home from a camp pick-up stopped to check out Alexander’s progress, and were given a tour of the box. The next thing you know, Alexander is sharing videos of herself hand feeding peanuts to chipmunks at her home, egging the kid on to try the same and remarking on her own “awesome” daughter of about the same age. Alexander described herself a a huge animal lover, even of crows, and said despite what you might think from seeing the box, she’s more of a cat-person than dog-person.

Alexander says she had painting lessons as a kid, but that this would be her first work of public art. She has painted dog portraits as a side gig, and also has taken on other subjects, including rock bands such as Soul Asylum. I heard about her exploits getting into now-defunct night clubs like Boston’s Channel with homemade press passes, and eventually working as a roadie for years, including in California, where she earned her way into handling coveted sound duties at a major club.

Alexander would stop every so often during our chat to ask if she was talking too much. Nope. This post was writing itself…

The chief is part of the team that coordinates the electrical box paintings, and he gushed over the doggie box, telling Alexander she was being too hard on herself over any elements or details missing (the shadows!). From there the conversation veered into other matters, including the touchy territory of mail box thefts (maybe those boxes will be the next public painting targets?).

After getting to know Alexander a bit, I suspected she might just be the type of artist inclined to hide a message or image in her project. She laughed, and said it took all of her willpower not to do that since it was a community project.