You no longer have to “hold it” while at the Hunnewell Field complex, as Wellesley has opened its new bathroom facility along the Cochituate Aqueduct. 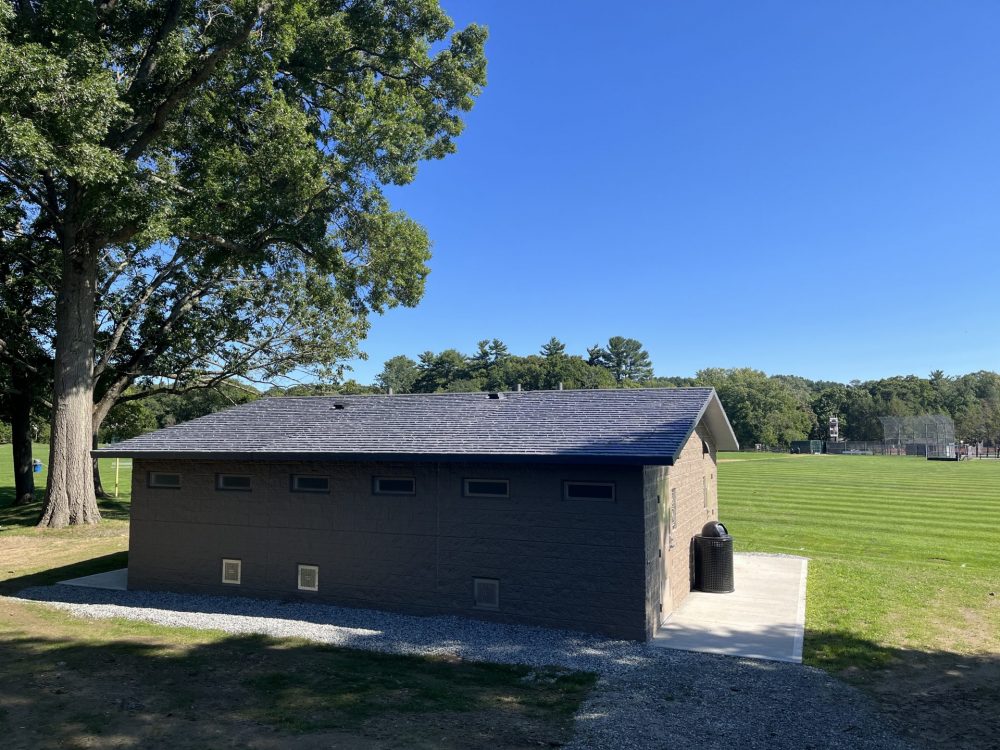 The building stands 26′ x 30′ and features a 3-stall women’s restroom and 2-stall, 1 urinal men’s restroom on the west side, plus 2 accessible, 1-stall universal rooms on the east side. It will be open 6:30am-9:30pm from March-November.

The bathroom was a long time coming, with a 2003-2004 plan identifying the need to replace the 1950s facility to, among other things, make it accessible.

Wellesley Natural Resources Commission Director Brandon Schmitt shared a timeline of more recent years that included a Town Meeting request rejected in 2016. At the 2017 Annual Town Meeting, the Department of Public Works requested $300,000, to be borrowed inside the levy, to replace the existing facility. Town Meeting approved $180,000, of which $30,000 was used by DPW to get municipal water and a sewer line to the site; that left $150,000 to offset the cost of the request. The previous bathroom facility went out of commission in 2017.

At the 2018 Town Meeting, $525,000 was approved for team rooms and bathrooms at the track and field facility. The hope was that an Aqueduct Bathroom Project would be able to use the same construction methods and material as the track and field team rooms/bathrooms facility in the future. However, bids for the team rooms/bathroom project came in twice as high as anticipated, thereby stalling that project as well as the aqueduct bathroom project.

In October 2018, the DPW piloted a portable trailer bathroom facility, although this was not deemed a permanent solution. In addition, the NRC did not consider this an adequate approach for many reasons including appearance, susceptibility to vandalism, serviceability, and storage capacity.

Finally, the new bathroom facility was installed entirely by the Community Preservation Committee, and the final cost was around $350,000. The pre-cast modular building was delivered this summer to Hunnewell Field in three separate sections, lifted into position on a prepared concrete foundation and connected together.

Organizations involved in getting this job done included the DPW, NRC, CPC, Town Meeting, Design Review Board, Building Department, and others.