The Wellesley Select Board at its meeting on Tuesday night approved a statement denouncing anti-Semitism amidst rising incidents both locally and across the country and state (see Wellesley Media recording of the meeting at about the 37-minute mark). Several residents, including those whose parents were Holocaust survivors, spoke in support of the Board’s action.

The town also shared resources (including contact information for the Anti-Defamation League (ADL), Wellesley Police Department and Wellesley Freedom Team) for those who experience anti-Semitism, or any form of bias or discrimination. 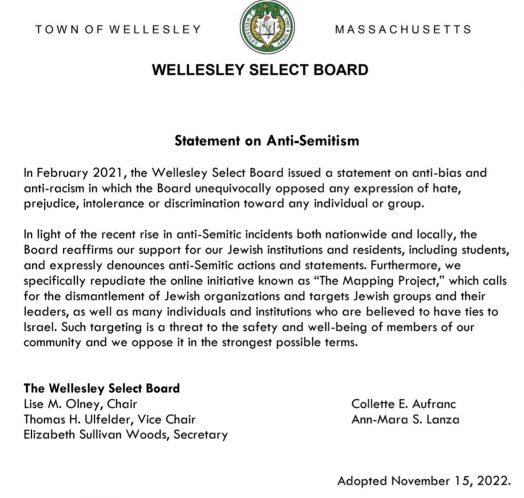 The town’s actions were sparked locally by an editorial recently published by the Wellesley College student newspaper, The Wellesley News, that expressed support for a project that maps organizations identified as being supportive of the Jewish community for the purpose of dismantling or disrupting them. The college and the Wellesley Police Department are on that list. College President Dr. Paula Johnson condemned the project, and the student paper later rescinded its endorsement.

The very mention of The Mapping Project is controversial, with some against it not wanting to give it any more exposure by uttering its name, and others saying it needs to be named. “It is repugnant. The Mapping Project deserves to be called out in this statement, because it is clearly a call to incite violence against people who are Jewish, and organizations and individuals…” Board Member Tom Ulfelder said.

Residents, including local rabbis, approached the Board about addressing the overall issue.

During the Select Board meeting, resident Mark Benjamin cited ADL research showing a new high in anti-Semitic incidents throughout New England, with a dramatic rise over the past 6 years. “One of the quandaries of anti-Semitism is trying to figure out how to respond as a community,” he said, emphasizing that doing so at the local level is necessary.

Resident Neal Glick also spoke, and expressed his gratitude for the town’s attention to this issue. He had previously shared a letter with the Board signed by several fellow residents on the topic as well as suggested edits to the town’s statement.

“I don’t want to be here, I never thought that in 2022 in the town of Wellesley that I’d be speaking on the topic of anti-Semitic threats,” he said. “But I feel like I have to be here. I’m the son and nephew of Jewish World War II veterans…When they came home and saw and realized the full horror of the Holocaust they had a mantra and it was drummed into me at a very young age, and it was ‘Never again. Never let this happen to Jews again, especially in America.'”

Glick said he felt like he needed to speak out after seeing support for the mapping project in a publication bearing the town’s name. He felt like the town should get more specific about the incident in its statement, not that he didn’t support the college leadership’s response. Glick said he sees this as “a call for dialogue” within the community, and a learning experience that would involve Wellesley College.

Select Board members acknowledged his concerns and said they appreciated his suggested edits, though decided a slightly less specific message would stand up better over time.

Resident Fern Wirth, who identified herself as the daughter of a Holocaust survivor, thanked the Board for its supportive stance and for reaffirming its anti-bias and anti-hate position relating to Jewish people following such “a clear message of hate” from members of the community.

“It shakes me to my core to hear of these events in our own community, in my own backyard,” she said. “It’s fitting that tonight’s meeting is close to Kristallnacht, which was the Night of Broken Glass, where Jewish businesses were ransacked and the unofficial start to the Holocaust began with that event.”