Opinions on how long Wellesley’s holiday lights should remain lit varied among Select Board members discussing the subject at their Dec. 20 meeting (around the 2-hour, 36-minute mark of Wellesley Media’s recording), with the decision apparently being left to the Municipal Light Plant, whose team installs the decorations with the town’s Park and Tree Division. 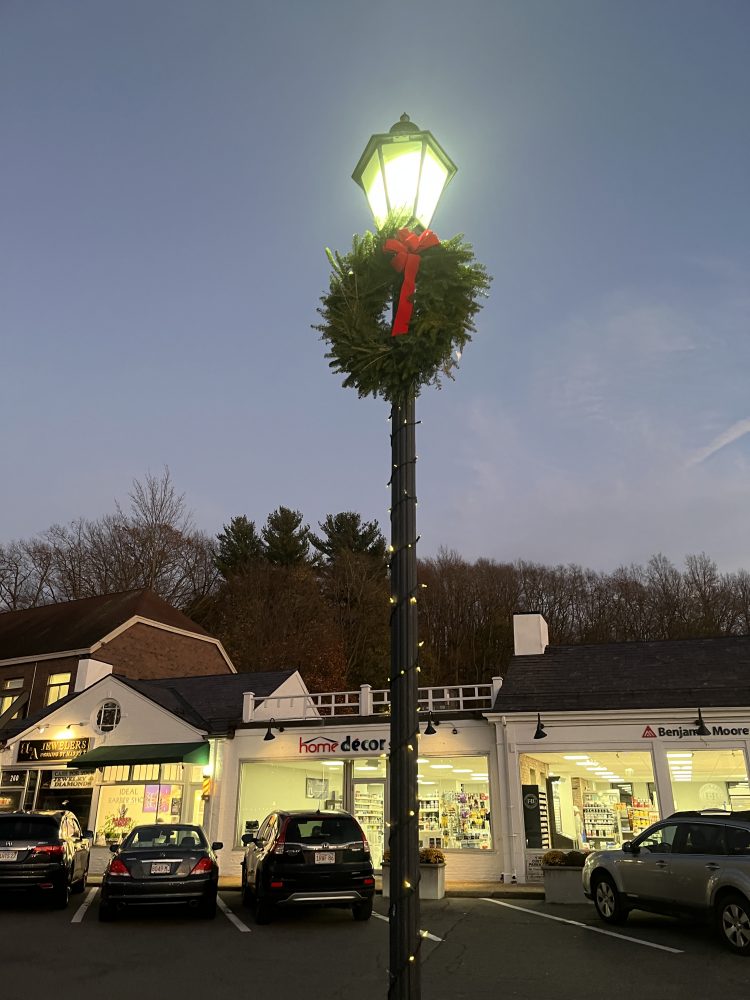 The lights traditionally go up around Thanksgiving and stay lit at night until just after the new year, and indeed, the town website refers to Jan. 2 as the end of the display. In some recent years they’ve stayed up longer, giving locals a boost during the dark days of winter, particularly during the height of the pandemic.

Executive Director Meghan Jop said the town has received inquiries, including from merchants, about whether the lights might be left up a bit longer, maybe until mid-January.

Wellesley Select Board Chair Lise Olney said she would think it’s really an MLP decision since that outfit pays for the electricity and it was not something for the Board to vote on. Having said that, she added: “I don’t support it. I think it undermines our energy use reduction goals and I don’t think it’s of any particular benefit to the town.”

Board member Beth Sullivan Woods said she has heard from residents and merchants—and from holiday decoration donors—that they’d like to see the display extended at least a couple of weeks. “I think it supports our economic initiatives,” she added, referring to the work the town has done to support businesses, including new restaurants.

Board member Ann-Mara Lanza acknowledged that if this is indeed an MLP decision that it should know the Board shouldn’t interfere. “I love them, I think it brightens the town, it brings joy. I think it’s worth it for another couple of weeks to just make the town look beautiful in the winter months,” she said, referring to them as “winter lights” or “holiday lights” as opposed to Christmas lights.

Leaving the lights on deep into winter can cause damage to the gear, noted Board member Tom Ulfelder, based on the town’s past experience. He said he’d be fine if the MLP sticks with its usual plan or leaves them up through Martin Luther King, Jr. Day.

While the Board indicated it wouldn’t interfere with the MLP’s decision, the Charles River Regional Chamber sent a letter to the MLP’s director asking that the lights be left up through the end of January to help support local businesses.

We reached out to the MLP to get clarification on its policy regarding lights and to learn more about the cost of leaving the lights on. We’ll update this post if we hear back.

Holiday decorations were the topic of another Select Board discussion in October. The board mulled using about $4,200 from the funds the town receives for supporting the Boston Marathon to pay for holiday decorations.

Wellesley traditionally has put wreaths on lamp posts, and has expanded beyond Wellesley Square and Linden Square into lower falls. Olney asked whether something “less Christmas-specific,” such as snowflakes or sprays, might be considered so that the publicly funded decorations aren’t tied as much to a single religious holiday.

With supply chains a challenge, the wreaths were ordered and installed. Don’t be surprised if the topic is raised further in advance of the holiday season next year.