The Wellesley Field Fund (WFF) set a goal last September to raise $1.5M in private fundraising for Phase 2 of a project to add expensive upgrades, including lights, to the Wellesley High School track and field. Supporters of the Community Investors-backed 501(3)(c) had hoped fundraising would be completed by Thanksgiving, but there’s still $930k to go before lights, team rooms, and a modern sound system come to fruition.

Now the campaign has gotten a boost from Needham Bank with a matching funds campaign that, if successful, would bring fundraising up to 50% of its $1.5M goal. The bank has announced it will contribute $100,000 in matching donations to the WFF capital campaign. This isn’t Needham Bank’s first fundraising rodeo geared toward Wellesley sports. Back in 2016 when the WFF raised $1.3M to resurface the track and install a larger turf field, the bank served as the effort’s lead community partner and donor.

Wellesley resident and Needham Bank chairman, president and CEO Joe Campanelli said, “Having a track and field complex that allows for night games and extends the uses for our town is a win for everyone, not just the student athletes. It brings people together as players and spectators and creates a safe space for the community to gather. We’re very proud to continue to champion this project with our phase 2 gift of $100,000.”

Specifically, the WFF Capital Campaign funds will be used for:

● Team rooms: Locker rooms and bathrooms for home and away teams.
● Lighting: Aimed at providing safety for athletes and spectators during games and practices at dusk or night, and allowing for more people to attend events. The dark sky-compliant lights would be designed to limit their impact on the surrounding area.
● Sound system: Speakers mounted to direct sound to the immediate track & field area.

(Funding for a combo bathroom and concession stand facility would largely be covered by money appropriated at the 2018 Annual Town Meeting.)

Not everyone in town is thrilled about the progression of the Track & Field project. Field neighbors and others have spoken out vociferously against the proposal during public meetings for a variety of reasons, including concerns about noise, environmental impact, and traffic. They appealed to the NRC to stick to its policies related to land stewardship when making a decision.

A Friends of Hunnewell Fields proponent cited proximity of a residential neighborhood to the project. In a letter to the Swellesley editors, Cliff Canaday said, “The closest homes to the track & field are just 34 yards away. Research shows that light at night—especially combined with noise—negatively impacts human health. It is especially harmful to children, and children live directly across the street from the track & field. If this was your neighborhood, if these were your children, what would you do? What should you do, as a neighbor?”

A tipping point occurred during the 2021 Town election, when Natural Resources Commission incumbent Raina McManus lost her seat to challenger Lisa Collins. Many observers predicted that this change in the board’s makeup would result in an NRC vote to allow lights to be installed at the Track & Field. Last July exactly that happened when the NRC voted 3-2 in favor of the School Committee’s proposal to allow the lights on the NRC property.

During the Dec. 6 School Committee Meeting, SC member Linda Chow delivered a presentation on key updates of the project. Chow said that the School Committee and the Natural Resources Commission, co-sponsors of the project, have been able to accept the first infusion of money from Phase 2 to support the design and permitting process for the team room, lights and sound system. However, the town won’t permit construction to begin until all the funds are secured.

Until that point, there’s still plenty of process to wade through. The School Committee has been meeting with the Health Department to address sanitation concerns about the bathrooms and concession stand area. Roaches, their insidious ways, and how to stop them have been discussed at length. There have also been meetings with the Department of Public Works regarding the potential impact on surrounding plantings, and how replacement trees and vegetation will be handled. In addition, color choices and texture for the structures must go before the Design Review board. The NRC will review plans along the way. 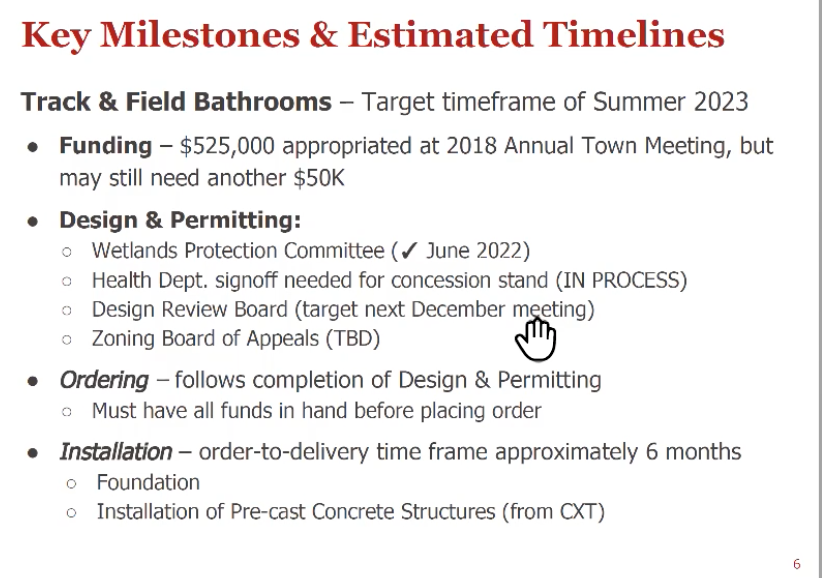 Even with fundraising challenges and a multitude of steps to take, Chow said the target time for the Track and Field bathrooms is summer 2023.

Assuming funding is available by end-of-year 2022, team rooms, lighting, and sound could be a reality by fall 2023.