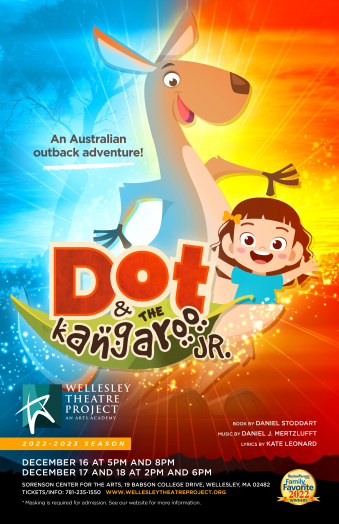 Wellesley Theatre Project this month will present the World Premiere Pilot Production of Dot and the Kangaroo Jr., a new Australian outback adventure at the Sorenson Center for the Arts at Babson College (18 Babson College Dr., Wellesley). The outfit is 1 of just 5 organizations being invited to debut the production.

The musical tells the story of rambunctious Dot, who longs for an adventure exploring everything her country has to offer. When she finds herself lost and afraid in the darkening Australian bush, Dot befriends a wise mother Kangaroo who enlists the help of Australia’s favorite bush creatures to help Dot find her way back home. Based on the 1899 novel of the same name, with Book by Daniel Stoddart, Music by Daniel J. Mertzlufft, and Lyrics by Kate Leonard.

Mertzlufft is a NYC-based composer/arranger most known for The Thanksgiving Musical on The Late Late Show with James Corden, and his arrangement of “Remy The Ratatouille” by Emily Jacobson that launched the TikTok Ratatouille musical movement. Wellesley College graduate Leonard is a lyricist and librettist working in theater, tv/film, and new media.

In Summer of 2022, several Wellesley Theatre Project students traveled to NYC to participate in a workshop of Dot and the Kangaroo Jr., with the writers and team at iTheatrics.

The upcoming shows feature two talented casts, composed of 30 students each, between the ages of seven and eighteen.