Wellesley’s Select Board has voted to support a Town Meeting article that would amend a zoning bylaw to allow up to 250 additional multi-family housing units to be built at the Wellesley Office Park site. That would bring the total of such units that could be developed on the John Hancock-owned property between Rtes. 9 and 128 near the Newton line to 850—some 350 “luxury” apartment units have been built to date as “The Nines” complex.

The Select Board discussed the matter at its Dec. 20 meeting (see Wellesley Media recording about 43 minutes in), a night after the Planning Board did likewise.

Peter Tamm, a real estate attorney with Goulston & Storrs, pledged that John Hancock/Manulife would partner with the town to rework 2019’s 40R development agreement that complements the bylaw approved at 2019’s Special Town Meeting to ensure any necessary changes that would support the increased multi-family unit allowance (more on Chapter 40R). Changes to that development agreement would only be valid if Town Meeting approved the proposed bylaw amendment.

Tamm described changes to the bylaw as being “surgical”—in other words, precise—and not wholesale changes to the arrangement for what the property owner is looking to re-market as Wellesley Park (without the “Office” in the middle). Not to say there won’t be some offices remaining at the 26-acre, 8-building property, all of which John Hancock is now marketing for development. The proposed change could improve flexibility for developers, increase the land value, and boost the town’s tax revenue.

“There’s zero interest in developing a hotel there,” Tamm said, referring to the current allowance for a 175-room hospitality development (he cited the unique negative impact that the pandemic has had on this industry). Adding up to 250 more residential units, perhaps including condos, would be a way to make use of the space to the benefit of the town and state in their effort to provide more housing. Tamm said he’d lean toward defining 25% of any new units as “affordable,” based on a percentage of Area Median Income, though said a range of price points could be considered within that 25%. One benefit to the town of allowing for more housing through a swap in uses for the property is that Wellesley could get around $700K from the state’s Department of Housing & Community Development as a 40R payment, he said. More than 60 of the units would need to be affordable, he said.

Unlike with The Nines, when it was first proposed, there is no specific project in mind yet this time around. Still, Select Board member Beth Sullivan Woods said it would be great to get a clearer picture of John Hancock’s “big vision” for the property so that the town can get a handle on what the safety, infrastructure, school, and other service needs might be in the long run (so far 30 of an anticipated 65 kids have become residents at The Nines). There could be the possibility of public safety equipment getting housed on site. 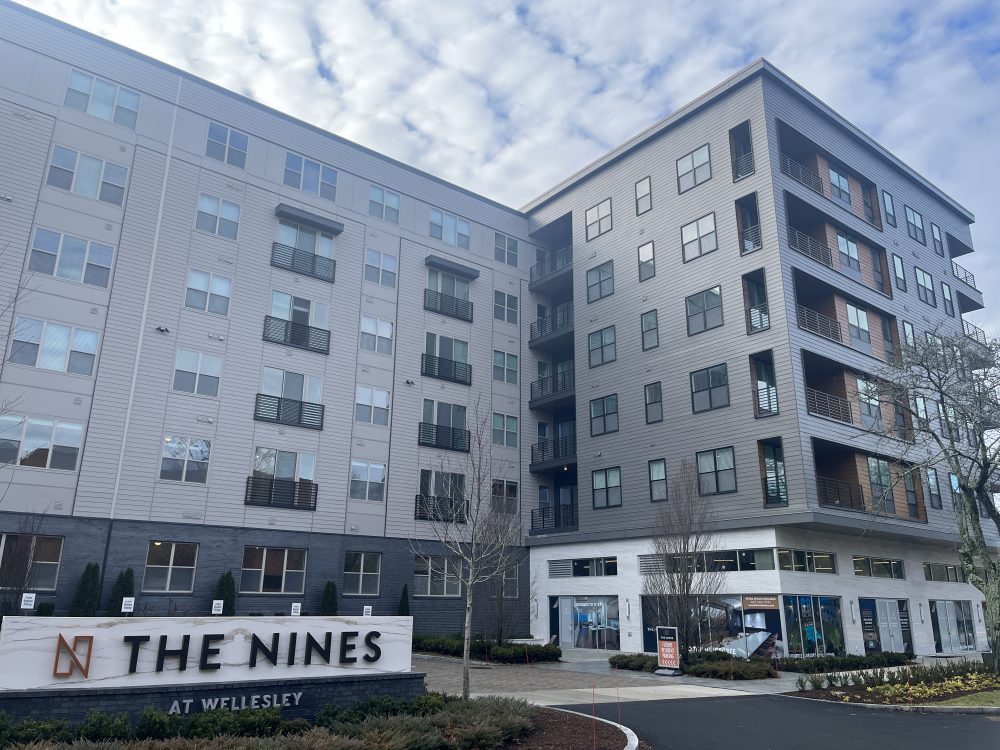 Select Board member Ann-Mara Lanza expressed hope that if more residential units are built in Wellesley Park (there, it’s catching on) that they will come at more reasonable price levels.

“I don’t think I’m alone in being saddened by the market rents at The Nines. I don’t think any of us anticipated it being that high,” she said.

Current nth degree pricing includes monthly rents of $2,700 for a studio, $7,850 for a 3-bedroom, 2-bathroom unit, and $2,100 for an “affordable” 1-bedroom, 1-bathroom unit (88 of The Nines units are deemed affordable per state guidelines). If this new proposal pans out, it’s unclear whether this possible new mix of 250 condos and apartments would get built before or after the originally defined 250 apartments that are allowed.

The Nines proved to be a key development in Wellesley’s effort to meet the state threshold for having at least 10% of its housing stock deemed affordable. Reaching that mark puts the town in a position to stave off some unfriendly development projects.

One challenge for the town now is helping make this island of housing at Wellesley Park, bordered by highways and the Charles River, more of a neighborhood. While pains were taken to make the development a green one, with electrical energy at the forefront, this is not an easy place to get anywhere else from unless you have a car or are a brave cyclist (well, there is the river and residents do have kayak access from a very nice walking woodland trail).

“Creating more of a neighborhood there would be a desirable thing for the people who already live there and for the town to have more of a critical mass over there,” Select Board Chair Lise Olney said.

More critical mass of residents or employees there is what’s needed to encourage retail development at what Tamm referred to as both “an outpost” and “secluded.” A firm marketing retail space at the property, doing what real estate marketers do, makes its pitch that “the project provides a restaurant or retail tenant exceptional connectivity and accessibility to the immediate and neighboring communities of Wellesley, Newton, Needham and beyond.”

Select Board member Tom Ulfelder noted that there are restrictions on the types of retail development allowed there based on the existing agreement, meaning you might see a 7-11, but not a Wegmans. He recommended that the Board get a refresh on the development agreement at a future meeting.

More:  Toward affordable— and attainable—housing in Wellesley