Search Results for: studs and students

Congrats to 2017 Wellesley High School graduate and current Harvard University senior Tony Shu, who along with his Breaktime co-founder Connor Schoen, has been named on behalf of their team to this year’s Forbes 30 Under 30 list in the Social Impact  and Youngest categories. Breaktime is a Greater Boston youth-led outfit working to end young adult homelessness.
According to the Forbes write-up: “During the first 8 months of the pandemic, Breaktime employed 25 young adults experiencing homelessness who led the preparation and delivery of over 500,000 meals to people experiencing food insecurity in Boston (all while earning a living wage and developing career-launching job skills).”
Wellesley High grad Andrew Tucker and current WHS student Ben Workman are among other locals working for Breaktime.

Having virtual classes for college these days has made it easier for Shu to devote time to running Breaktime.

Here’s what he says about running the business during the pandemic: “COVID has certainly changed a lot for both our organization as a whole and for the young adults we work with. For Breaktime, we were a few weeks out from the grand opening of Breaktime Cafe (a coffee shop, community center, and transitional employer). We had to put that project on pause and quickly pivoted to creating purposeful transitional employment for young adults experiencing homelessness who work in our building and kitchen to address food insecurity (through preparing and serving/delivering meals and groceries to families around Boston). For our young adults, health and safety have definitely been a top concern. We work with all of the young adults who work at Breaktime to secure some sort of transitional housing (temporary housing that lasts a few months to a year, allowing young adults to build up stability in their lives). In many cases, these transitional housing programs have a requirement that residents have a job in order to get housing, so we can sometimes help to address this chicken-and-egg issue by coordinating the entry of young adults into transitional housing (at another program) and transitional employment (at Breaktime) simultaneously.”

A group of enterprising recent Wellesley High grads have joined forces on a landscaping business dubbed Studs & Students whose tagline is “We treat your lawn like the quad.”

The crew, all of whom have had experience doing some yard work in the past, includes Jared Diamond, PJ Genta, John Hillmer, and Henry Gould, with Teddy Guess as the honorary 5th member. They’ve pulled together gear from their families, and some of their own vehicles, to provide services.

The business got underway in April when the young men got sent home early from college due to the pandemic. They had a busy summer, with lots of mulching jobs.  Most of them were back on campus during the fall, but they’re now back and ready to help with your snow removal needs over the next couple of months before heading back to school late next month.

“For the winter, we use shovels and a team of three to clear driveways and walkways, and find it very effective,” the team says. 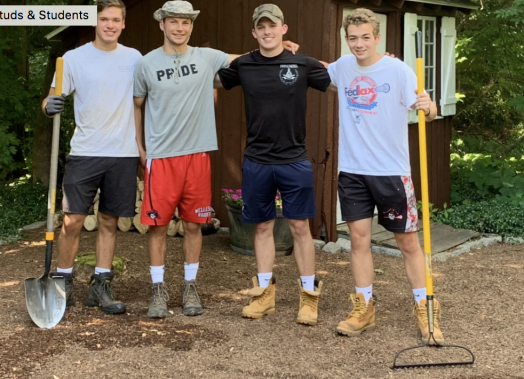 How Wellesley’s internet speed stacks up

The Metropolitan Area Planning Council (MAPC) has published an interactive map of median internet speeds across the state, and guess which side of the Digital Divide Wellesley is on?

With a median speed of 141.08 megabits per second (Boston’s median speed is less than half that), Wellesley is easily among the state’s Haves when it comes to internet speed. Whether that’s enough if you’re in a household jammed with remote school and work devices…we can’t say. Though we can say that Weston actually blows Wellesley and pretty much everyone else away with a median download speed of 234Mbps

Sadly, The Swellesley Report’s download speed for our Verizon service is a measly 83 Mpbs, according to the speed test we took—and yet we still manage to pump out this stellar publication! We keep threatening to move to a higher tier, but the price…

MAPC dug into its data to show where the Digital Divide might be surfacing in the state, where speeds fall below the 50-100 Mbps most common across the state.

The deal begins in January and is for 10 years. MLP Director Don Newell says:  “The terms of this deal are close to market power and is very competitive for non-carbon emitting energy.  This is a lower price than other non-emitting sources, so it will help keep the WMLP customers at a lower rate, while getting us closer to our non-emitting goals.” 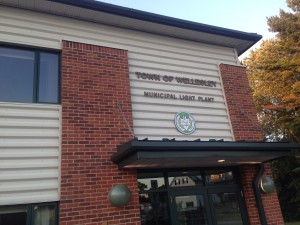 The deal was brokered through an organization called Energy New England with hydro
generator FirstLight Power.

The MLP says its participation in the contract will mean that close to 5% of its
energy portfolio will be supplied by this green resource. The WMLP figures to boast a 57%  non-greenhouse gas
emitting portfolio by 2023.

Separately, Sustainability Wellesley was recently celebrating the MLP’s decision not to invest in a biomass contract related to a facility in Palmer, Mass. “In addition to controversy surround biomass as a renewable, there were concerns regarding social justice. The MLP Board opted to pass on this project,” Newell says.

The unheard voices of American workers have risen up in song at Wellesley College Theatre’s Working, A Musical, running at the Ruth Nagle Jones Theatre through November 19. The show plays like a collection of short stories, episodic yet joined together by the narrative thread and underlying theme of what it means to work in American. Each vignette, most musical, some not, explore in the worker’s voice what exactly it is they do all day while they’re on job, and what they think of what they do.

First staged in 1977 at Chicago’s Goodman Theatre, from there it went on to Broadway at the 46th Street Theatre. It ran there in 1978 for 24 performances and 12 previews. Ever since, it’s been doing the rounds everywhere from regional theaters to high schools. Author Studs Terkel (who won the Pulitzer Prize for his book The Good War) brought the workers’ tales to life, and playwrights Nina Faso (one of the creators of Godspell) and Academy Award and Grammy winner Stephen Schwartz put it on stage, tweaking it here and there over the years.

The sold-out show starts out with the cast of eight Wellesley College students on the spare stage designed by Wellesley’s own David Towlun. They’re singing and smiling, looking for all the world like a bunch of cheerful students just there to entertain. Nothing subversive here, people. Just sit back and relax while we entertain you. Then they got into character, and the tone changed from happy trilling to something deeper. An invitation to a view of the real world was then extended to the audience, and there was no guarantee that it would be pretty.

At first a few of the actors rushed their lines, perhaps due to first-act jitters, but the Backstage Boss/Director Nora Hussey  must have told them to breathe and slow down, because that didn’t continue. Off we were to the housewife’s home and the health-care worker’s facility, the waitress’ domain and the prostitute’s corner to hear their stories. You can almost hear the directive: “Don’t judge, don’t judge, don’t you dare judge..,” which itself became tiresome especially when it was preached, not practiced. In this show, the Working Class Hero is usually exactly that, while the Hedge Fund Manager is a caricature of himself, and the Socialite is a lightweight who may have just compared her “plight” to that of a homeless woman.

“Brother Trucker”  (music and lyrics by James Taylor) was a standout song for me, sung by Briar Banerji, who also did an amazing job as the Mason, one of the few characters in love with his job, saying “All my dreams seems like they got a piece of rock mixed up in ’em.”

The housewife and mom, played by Juliette Bellacosa with resignation and a nod toward the boredom of the gilded cage perhaps struck closest to the Wellesley mom contingent when she said, “I have a lot of work to do, it’s just that sometimes you wish you had something more exciting to talk about at dinner parties.”