Lacrosse enthusiasts in Wellesley have been looking to locate a rebound wall in town for years, and after a recent Zoning Board of Appeals (ZBA) meeting that took up the topic, it’s still unclear whether we’re close to seeing such a structure.

No offense to the ZBA members, but I felt like my head was a wall having a lacrosse ball bounced off it for an hour-plus of watching & rewatching the April 21 ZBA meeting. It was an event only a truly policy wonk could love, as ZBA members thoughtfully explained and discussed their predicament in this case (the action starts at about the 1-hour, 52-minute mark of the Wellesley Media recording).

“The difficulty is two-fold. The first is it’s a small project and the ZBA is not empowered to review it and even if we decided we could review it, the criteria that we use for major projects is inapplicable…” ZBA Chair Randy Becker stated near the start of the hearing. “From our perspective this is not about the Sprague Field wall, this is about a request to have the ZBA do something that it’s not authorized to do under the bylaw. So that’s the box we’re in.”

Famous Walls: The Wall at Fenway Park was originally built from wood at 25 feet high in 1925, but after a fire at the park in 1934 it was rebuilt, and now the 37-foot-plus Green Monster consists of concrete, tin, and plastic, and has pricey seats on top.

The upshot of the hearing is that there will be another one at the ZBA on May 19. The challenge for the ZBA is that the cement rebound wall—which could be used for lacrosse, soccer, etc.—would be considered a minor project, and is more in the domain of the School Committee, which owns the targeted location at Sprague Fields, and the Design Review Board. However, to move things forward, the ZBA may need to amend the special permit issued back in 2008 and one or more of its conditions.

Town Engineer Dave Hickey, who updated the ZBA on the proposed practice wall, said discussion of where to put such a structure goes back to the renovations at the Hunnewell track and field that finished in 2016. Some thought was given to putting the wall on that property, possibly replacing the existing tennis rebound wall near the courts on Rte. 16, but it was determined that wouldn’t work.

So on to Sprague Fields, which were remediated and transformed under a master plan from 2007-2008, that Hickey said during the recent ZBA hearing was “intended to be somewhat rigid, but recognize that this is an athletic field…” The School Department, Playing Fields Task Force, and others in town government have embarked in a process over the years to add a rebound wall to Sprague Fields even though the authors of the master plan hadn’t envisioned one back then.

The sport has become much more popular in town since then, even supporting a Wellesley Square store dedicated to lacrosse that opened in 2011. While many lacrosse players in town make do with backyard backstops, head over the Bates playground wall, or other building walls, coaches and others cherish the idea of having a more official wall for practices. Hickey has referred to the wall as “a priority project” for the Playing Fields Task Force and the schools, but as with so many town efforts, the COVID-19 pandemic hasn’t helped move things along.

Famous Walls: King Nebuchadnezzar II (r. 605-562 BCE) built three Walls around Babylon at heights of forty feet and so broad at the top that chariots could race around them.

Most of the public discussion about the wall has taken place at the Playing Fields Task Force, including a presentation in June of 2018 that included lots of pictures of walls in other nearby communities (the task force has collected additional documents on the town website). Included in the pitch prepared by youth coach Matt Fantasia: Walls are an “absolute game changer in any town lacrosse program with regard to development trajectory, as evident by the numerous surrounding communities with outstanding, successful lacrosse programs (Lincoln-Sudbury, Medfield, Hingham, to name a few).” An approximate cost was listed as $20K to $30K.

The School Committee that summer aired its support for the project, then estimated to cost between $30K and $50K, with monies coming from the Field Fund. (We’ve reached out to town officials for the latest cost estimate and clarification on where the money is coming from.)

Those in town government promoting the idea have met with neighbors since early on, including at a meeting at the Sprague Elementary School Library in November of 2019. At that point, three possible sites at Sprague Fields were on the table, down from an original four potential spots.

Famous Walls: According to Encyclopedia Brittanica, The Great Wall of China is “the most extensive and best-preserved version of the wall dates from the Ming dynasty (1368–1644) and runs for some 5,500 miles (8,850 km) east to west from Mount Hu near Dandong, southeastern Liaoning province, to Jiayu Pass west of Jiuquan, northwestern Gansu province.

Hickey acknowledges that placement of the wall has been an issue debated among neighbors, with those living near the tennis courts behind the middle school wanting the wall away from them, and those living closer to the baseball field wanting it away from them. Video shared by the Playing Fields Task Force shows the sound of lacrosse balls hitting a rebound in Wellesley doesn’t raise the decibel level much—though your mileage may vary based on how loud the players’ voices are.

Neighbors spoke at the ZBA meeting, citing safety concerns for an elderly couple that lives near the current proposed wall location behind the facilities building. That couple has already compiled quite a collection of softballs and baseballs thrown or hit into their yard, according to neighbors.

That location behind the facilities building is also next to a scraggly natural habitat garden that Hickey said will get spruced up a bit under the plan (though the idea is for the habitat to be natural). That same building is adorned with signs warning people not to bounce balls off of it, and the planned wall would include protections to prevent use of the building surface for ball play. 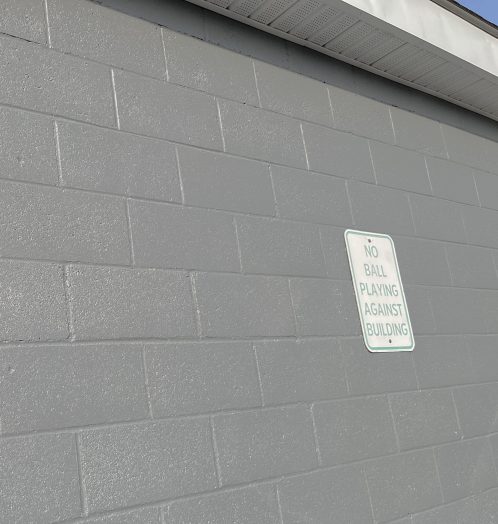 The pre-cast concrete wall itself would stand 12 feet high and be 32 feet wide. It would be sandwiched by 30-foot playing surfaces on either side.

Famous Walls: Some $15B was allocated to expanding the U.S.-Mexico Border Wall during the last U.S. Administration, though most spending went toward shoring up the existing wall.

The School Committee gave the spot behind the facilities building at Sprague Fields its blessing in November of 2019, according to School Committee Member Linda Chow, who updated the group on the status of the wall during its May 3, 2022 meeting (about 7 minutes into the Wellesley Media recording).

She stressed the efforts made to engage the community in the process. The School Committee and Playing Fields Task Force jointly sent a letter of support for the project to the ZBA in March of 2021 as well, and from there efforts were made to get the project on the ZBA agenda. Department of Public Works Director David Cohen that May said during a Playing Fields Task Force meeting that the town was looking to “punch this thing over the goal line” and get it completed for about $80K that summer.

Hickey reviewed the plan for the proposed wall setup later last year, during a July 14, Design Review Board meeting (about 1 hour, 25 minutes into the Wellesley Media recording). It got the Board’s approval, though he was urged to have a more sustainable plan in place for future projects.

Where the wall project goes from here could be determined in part by that next ZBA meeting. In the meantime, proponents are itching for it to be built.

“I have been involved in trying to help get the lacrosse wall build from day 1,” says Wellesley High Athletic Director John Brown, who shared a video of such a wall in use at Lincoln-Sudbury. “It has been a very frustrating process as we try to continue to help give student athletes opportunities to play and to help improve in sports that they love. Hopefully we are able to get this wall built at Sprague… These walls are in many of the towns that we compete against and are great to help kids improve their skills and are not a problem.”
print