Growing lettuce in the Wellesley Middle School greenhouse? Yep, that’s a thing. This year’s Design and Technology class, an elective at Wellesley Middle School, changed its  curriculum. Spearheaded by Mr. Bodkins, a teacher at WMS, the goal this year was to hydroponically grow vegetables and herbs to be served in the middle school cafeteria. Hydroponic growing means growing in water and not in soil. Students had to build hydroponic growing systems to meet their goals, which took much dedication and work. The hydroponic systems were installed  in the newly renovated greenhouse at WMS. The greenhouse windows had been replaced and it was fixed up last summer, so this class could take place. This course was open to all 8th graders, first semester.

To build hydroponic growing systems, students first had to learn about what was necessary for plant growth. After a few weeks of study, students had a solid understanding of the process needed to grow plants, the systems they would use, and how to construct them. Classes reviewed the options for growing and decided to build Deep Water Culture systems (DWC) and Vertical Drip systems.

Students were then able to select seeds for growing. Most of the chosen produce was lettuce because Mr. Delaney, the head of Whitsons, which is the food service at WMS, requested lettuce and herbs. Mr. Bodkins placed an order for the many varieties of seeds selected by the classes from Johnny’s Seeds.

Then, Design and Tech students faced the challenge of actually growing plants, but before the germination process could start, the benches in the greenhouse had to be fixed. Classes then improved the broken benches in the woodshop over the course of many classes in the woodshop. Once the benches were fixed, the germination process started while students started to build the hydroponic systems.

One of the systems built to grow plants was a Deep Water Culture System. This system holds plants that have germinated in rockwool growing cubes. They are then immersed into a tub of nutrient rich water — essential for plant growth. The DWC systems installed at WMS were rafts, which held the plants in a large tub of water. The students also built vertical drip systems. These were wide plastic tubes with holes filled with various media. The water dripped down from a tube above, and it went to the plants placed in the tubes. The students melted plastic until it was malleable to make this particular system.

Michael Ossam, a Design and Tech student, remarked, “I really enjoyed building the parts for our system. For example, I liked melting the plastic for the vertical drip system,” Ossam said.

Design and Technology students also had an opportunity to go on a field trip to Water Fresh Farm in Hopkinton where they grow produce hydroponically. The students got a tour of the facilities and even tried the food. They got to walk around and look at the systems that Water Fresh Farm uses and compare them to the systems at WMS. Water Fresh Farm uses Deep Water Culture systems, similarly to WMS, but their systems are used on a much larger scale. They also used vertical drip systems for growing some of the herbs. It was a very informative field trip, where students witnessed more developed systems in which they could look up to, or try to replicate. 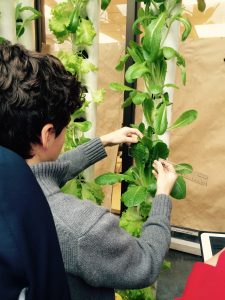 At the end of the semester, the students created logos which went on the salads. Slides for advertising the produce were displayed on the TV’s outside the WMS main office for students to see. Finally, it was time to harvest (on Friday the thirteenth of January, really…) The produce had mostly been successful and usable, and the high quality food was eventually served at lunch. The students picked and washed the plants, and then the salad was served the same day in the student cafeteria with lunch!

Ultimately, as Will Fortescue, a Design and Tech student commented, “If somebody has a knack for gardening, growing plants naturally, or just learning something new, they should sign up for Design and Tech.”

This year’s new Design and Technology challenge was innovative, and there is still much room for development after the success in Mr Bodkins’ semester one classes. With semester two underway, more WMS students will be building on the progress made during semester one.

“It gives kids a chance to learn something new about vertical farming and hydroponics that many kids don’t get the chance to learn,” said WMS student Jordan Monsen.  “It really is a great class for thinking about how the world can sustain itself in the future,” Monsen said. This year, the WMS Design/Tech Challenge will be on display at the Wellesley STEM Expo on April 8th.