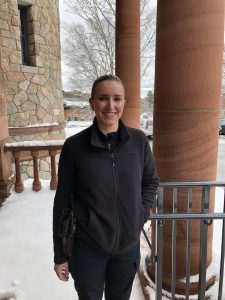 New Wellesley Animal Control Officer Jenny Smith won’t find much in the way of pigs, goats, or horses in town, as she did growing up on a small farm in Holliston. But Wellesley’s thousands of dogs, cats—and especially humans—should keep her busy.

Recently retired longtime Animal Control Officer Sue Webb trained Smith over the past week to get her more familiar with the community and job, which the new animal control officer heard about from people she knows who already work here.

Smith is well equipped for the task, having worked a series of animal-related jobs over the years. She most recently managed a dog daycare that included training classes, including Therapy Dog International test preparation. Smith has taught basic agility elements and course handling for dog competitions and has competed at events such as the Westminster Dog Show, as well as in equestrian competitions.

She’s owned a pet-sitting business for several years and has been known to venture into Wellesley’s parks and trails.

So what does an animal control officer do?

“Many members of the public may not be aware of the amount of work that goes into ensuring that the cats and dogs that live in town are properly vaccinated and licensed.  There are approximately 3,000 cats and over 3,000 dogs in Wellesley. It is my responsibility to reach out to their owners to ensure they stay up to date with their rabies vaccinations and if they are not complaint to issue warnings and fines when warranted,” Smith says.

She’s also responsible for investigating all animal bite complaints and forwarding findings to the Wellesley Board of Health to ensure the proper quarantining occurs when necessary.

Asked if she ever envisioned herself working for a police department, Smith said she actually did: “Strangely enough I considered working in law enforcement but so much of my life revolved around animals. So I felt that working as an animal control officer would allow me to combine both interests.”

Smith was”t able to come up with a really weird animal experience from her past other than recalling an occasional bat or squirrel in the house. Come on Wellesley, I know we can give her something better than that…

Officer Smith is available by email at jsmith@wellesleyma.gov or by phone at (781) 235-8460. For help with animals needing immediate assistance, contact the Wellesley Police Department dispatch at (781) 235-1212.