We were saddened to learn this weekend that Harry Clark, the 2019 Wellesley High School graduate who inspiringly crossed the commencement stage on his own after losing his sight from a rare brain tumor, had passed away at the age of 20.

The Wellesley resident, who suffered a stroke in February, had been in and out of surgery and rehab since, and died on July 3. He is survived by his mother Eunice Groark, father Kevin Clark, and sister Phoebe Clark, a WHS student.

Harry packed a ton into his short life—a life altered at the age of 5 when he was diagnosed with a rare brain tumor called craniopharyngioma, for which he received years of treatment at Dana-Farber Cancer Institute. His life was altered again in third grade, when he suffered a stroke after which he had to relearn walking and talking. Harry’s vision had been compromised by his tumor and cyst, but he lost his sight completely during a family trip to New York in November of his senior year in high school. He still managed to graduate with honors.

Harry was slated to attend Providence College this fall, where he intended to study to become a child psychologist. He spent time this past year at Assumption College gaining skills needed to navigate the college world and beyond as a blind person.

Working around medical appointments, Harry took part in a seemingly endless list of activities in and out of school, as documented in a Wellesley Townsman profile and WBZ TV-4 segment following his high school graduation.

He sang and taught at his church, joined Key Club and served as sophomore class vice president at Wellesley High, and landed a spot on the Youth in Philanthropy board. Harry cycled the Pan-Mass Challenge with his parents on tandem bikes. He spent time with friends made back at Sprague Elementary School and all along the way.

Taking part in all this involved juggling schedules along with countless medical appointments by Harry, his family, and support network.

Perhaps his most visible activity was that of team manager for the Wellesley High girls’ basketball team throughout his time at the school. In February, funds raised at a Think Beyond Pink doubleheader between the Wellesley and Natick boys’ and girls’ basketball teams went in part to the the Cranio Warrior Research Fund addressing craniopharyngioma on Harry’s behalf.

In fact, I happened to be sitting right behind Harry during the girls’ game. Whenever anything exciting happened he’d accidentally poke me with his cane, then quickly turn around and apologize. At one point I told him, “Don’t worry about it, it’s your night.”

Girls basketball team coach Glen Magpiong says that’s “a classic Harry story. He would always tell me he was sorry for something. It was a running joke between us. I kept telling him never tell me you’re sorry again, he would laugh and say ‘I know.’

Magpiong met Harry when he was in a youth basketball program as a kindergartner or first grader.

“I knew he was a special boy when I first met him,” Magpiong says. “He was the toughest kid I ever met. He was a brave warrior who always had a great attitude and an infectious smile, despite the many challenges he faced. He and his family positively impacted so many lives with their incredible faith and hope.”

Harry earned a standing ovation at Raider Pride Night in 2019 when he received the Coach Seaver Memorial Scholarship Award for courage commitment and loyalty. People were up on there feet when he received the Helen Stewart Service to Others Award that Spring, too, at the Senior Awards Banquet. 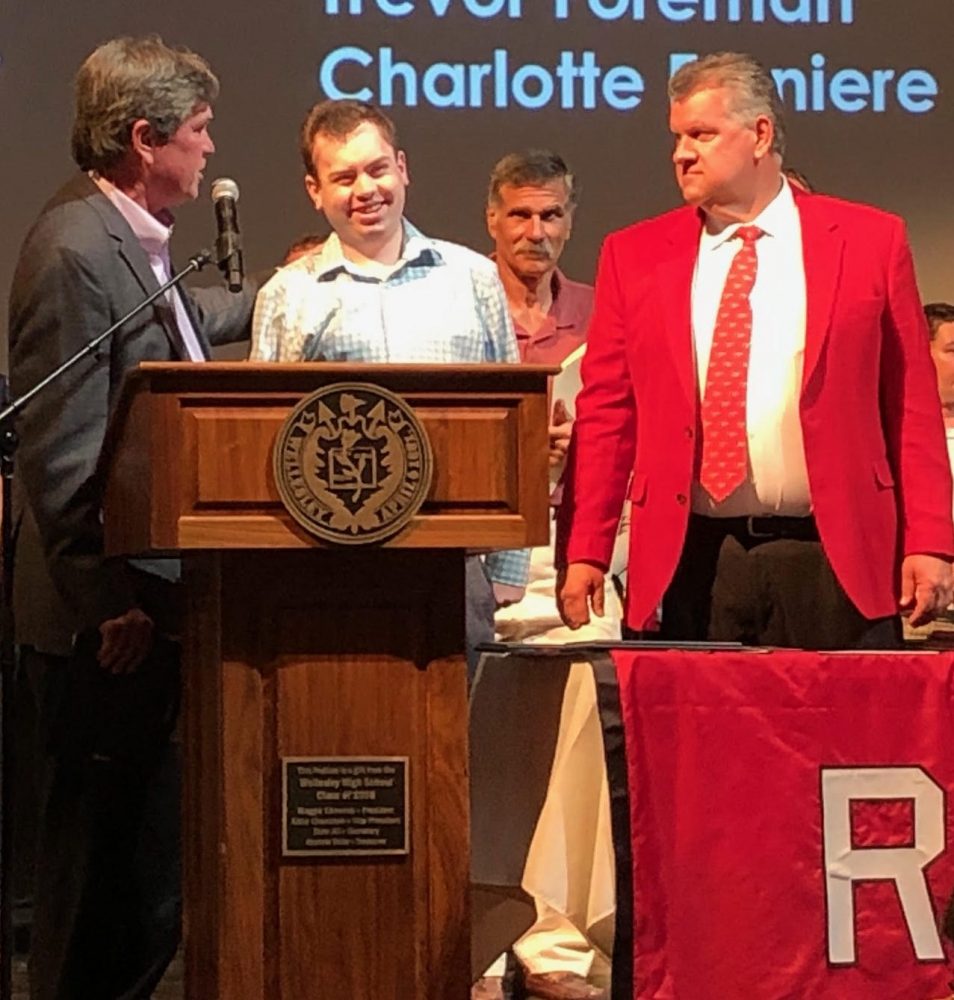 Diane Zinck, secretary to the principal at Wellesley High, can’t recall when Harry started coming into the Main Office for visits. “It just feels like he was there from the beginning,” she says. The Main Office staff dubbed him “The Mayor,” as he not only stopped there, but had other visits along his route.

“Harry would come in at the end of his day to wait for his mom and family dog, Clover to pick him up.  He was our break in the crazy day, we would all stop what we were doing to circle around him to talk, laugh, sing and dance (yes, we danced). Harry’s repertoire of lyrics and 80s music was incredible, better than Spotify.  As busy as dismissal gets, we all made it back to be with Harry, he was a giant force that pulled us all together,” she says.

The staff all took turns walking him out, and when in his junior year he volunteered at Newton-Wellesley Hospital and was picked up by an Uber driver, “we would make sure the driver knew they had a very important passenger.”

Harry impressed Zinck with how hard he worked learning to navigate hallways and stairs alongside a specialist during his senior year as his sight declined.  “His mom would remind us that Harry needs to walk out on his own when she arrives to get him to strengthen his skills.  What I didn’t have the heart to tell his mom was, we all fought to walk him out, all of us, we had to take turns so everyone got the privilege of helping HIM.”

Zinck has reflected in recent days on the fact that Harry wanted to be a doctor. “Harry made rounds like a doctor does, checking in with his friends as they were his patients daily… When you were not there, out sick or just having a crappy day, Harry was most concerned. He would follow up with you to make sure you were okay, like a doctor, with an extraordinary genuine manner that made you feel better.’

While Harry made the rounds at school—and more than his fair share of medical facilities—he wasn’t shy about taking part in special programs for kids with serious illnesses either.

This included the Paul Newman-founded Hole in the Wall Gang camp, Waypoint Adventure (where he was accepted into a leaders-in-training program) and the WEEI Jimmy Fund Radio-Telethon.

During his colorful interview with WEEI, we learned about Harry’s competitive card playing and trash talking side, among other things.

He was also on hand at Fenway Park for legendary New York Yankees pitcher Mariano Rivera’s farewell tour. They came away mutually inspired upon meeting, with Harry vowing to become a Rivera fan despite the pinstripes and Rivera calling the 13-year-old Red Sox fan  “Just a beautiful boy.”

Similar sentiments are being shared on social media by those who knew and were inspired by Harry.

Says WHS’s Zinck: “Our hearts are heavy with the physical loss of our hero. Yet at the same time, they are full with Harry’s strength and courage as he leaves an indelible mark on our lives.  Our love to the Clark family for sharing him with all of us, we are far better, kinder and empathetic people for knowing him.”

The family is having a private service and that will be followed by a broader celebration of Harry’s life in the fall. Here’s a formal obituary for Henry “Harry” William Harry Clark.