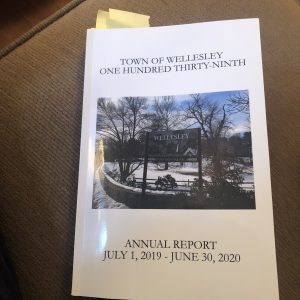 Wellesley’s 139th Annual Town Report is out, both online and in hard copy, and as usual it is filled with lots of interesting facts and figures.

The information in this roughly 400-page report for the period between July 1, 2019 and June 30, 2020 (fiscal year 2020), is sort of warped considering that it contains a solid four months of pandemic-influenced data, so that must be taken into consideration when reading through it.

Here are 10 items that popped out for us. (What jumps out to you? theswellesleyreport@gmail.com)

Unprecedented report: The word “unprecedented” somewhat surprisingly only appears twice in the entire report, once under Wellesley Free Library’s report and once under the School Committee. COVID appears 77 times. Disappointingly, not a single “abundance of caution.”

Affordable Wellesley. A word you might not expect to find in the report, “affordable,” actually does make several appearances, including here: “In January, the Town attained the state mandated 10% affordable housing threshold with the approval of the 40R project at the Wellesley Office Park.” Not to say the town doesn’t have plenty of work to do in diversifying its housing stock, but it’s a start, and makes it harder for developers to exploit loopholes.

Diminishing demo targets: While teardowns are not uncommon in town, there are nowhere near as many as there were just a few years ago, when anywhere between 90 and and 100 was the going rate. There were 44 this past fiscal year, down from 45 the year before, which was up a few from the high 30s the fiscal year before that.

Big earners: It’s impossible to go through the report without snooping into who is making what. A couple of town employees make enough individually to hit Wellesley’s $189K residential household median income mark, including top earner Wellesley Public Schools Supt. David Lussier. He seems to have made the right move by not leaping from his newspaper route back in the day and into a journalism career.

Price check please: The Department of Weights and Measures checked 900 items in local retail stores to ensure they were priced (scanned) correctly (98% accuracy is the standard). Only three of eight retailers inspected passed the test. “More work needs to be done in this area to ensure correct and accurate pricing in retail stores,” the report reads. So check those receipts people!

Diversity, Equity & Inclusion: Wellesley Public Schools hired its first director of DEI, and among accomplishments was planning the launch of an equity toolkit for educators.

Locked in: The Fire Department section is chock full of interesting numbers, but the one that raised our eyebrows was 96 for “person locked in home, car or elevator.” What? Locked out of home or car would make sense, but…As it turns out, this number does represent a bit of both A common situation is for a kid to get locked in a bathroom, or parents to get locked out of a house and a kid get locked in and doesn’t know how to open the door.

Wellesley Farms: The Wellesley Health department issued 23 livestock permits, up from 19 the year before.