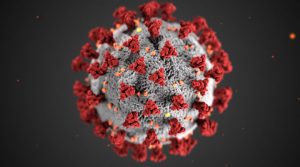 NEW CANCELLATION: Meet the Candidates Night, which was supposed to be held on Thur., March 12, at Wellesley Middle School. Remember to vote in the Town Election on March 17 — that’s still happening.

We began our day Friday, several hours before Wellesley revealed that a resident tested positive for the new coronavirus (COVID-19) and that 2 schools would be closing early, wth an email in our inbox from a trustworthy Swellesley reader that said: “I heard they just cancelled the WHS spring break trips abroad.”

We dutifully reached out to Wellesley High and the town to confirm this, but didn’t hear back on it until the info showed up as confirmed in a public announcement late in the afternoon. Not surprising on the delay given that the local braintrust was updating its plans and crafting its message. Part of that message: “Out of an abundance of caution, we have made the proactive decision to release students early at Upham and WMS in order to fully clean and sanitize both buildings.”

Since the COVID-19 news was released, cancellations or postponements have begun piling up, some with a sort of sheepish tone of “we’re not sure we should be doing this, but better safe than sorry.” Many with the phrase “an abundance of caution,” making us suspicious if there’s one PR person doing a particularly brisk business in town.

A couple of green-themed gatherings for Wellesley election candidates were nixed. The hosts of one of these slated for next week sent an update on Friday night that read in part: “This is likely unnecessary, but we just like you all too darn much to risk it. This was a hard call to make, but if cancelling non-essential gatherings might help the community in the long run then we will do our part and drink alone.”

Saint Paul Church in Wellesley called off its St. Patrick’s Day dinner: “We are disappointed to announce that out of an abundance of caution we will not be holding the annual St. Patrick’s Day Dinner at St. Paul on March 14.  We thank everyone for their efforts to date and look forward to next year. If you have already purchased tickets, please send an email to stpaulsocialcommittee@gmail.com so that we can provide you a refund.”

Perhaps the most dramatic cancellation came from Wellesley United Soccer Club, which issued an email to participating families acknowledging the Wellesley Public Schools decision to release Middle School and Upham students early on Friday: “This proactive move by Wellesley Public Schools was made out of an abundance of caution. Driven by similar motivating factors and with the health and safety of all WUSC players and families as our highest priority, WUSC has decided to immediately suspend all remaining winter programming. This decision affects all WUSC sessions scheduled between March 6th and March 20th. We sincerely apologize for any inconvenience this may cause. But our hope is that this action will ensure that WUSC families are not subject to COVID-19 exposure at WUSC events and our community is 100% healthy for the upcoming spring season that begins in early April.”

Wellesley Youth Basketball called off a game originally scheduled to be played at the middle school, and later at Sprague.

Planning to see the cool new fake bar and other art at Wellesley College’s Davis Museum? You’ll need to wait at least until April.

“With an abundance of caution, the Davis Museum at Wellesley College has suspended all public access through March 31st. Public programs have been canceled or rescheduled and gallery access is limited to the Wellesley College campus community.”

Wellesley College on Saturday morning announced it was postponing a concert:

“We have been advised by the Provost and Dean of the College that we must unfortunately cancel our Jazz and World Music Faculty Concert tomorrow (Saturday). We are so very sorry, but we can’t run the risk of hosting a large public event at this very uncertain time, given that Covid-19 is now in the region and the town of Wellesley.

While we are very disappointed — our faculty have been months in preparation for this concert! — we hope to reschedule at a later date, and we will be sure to let you know! Look for updates about future events. Thank you for your support and understanding, and we hope to see you in person soon!”

Also on the music front, the Wellesley Symphony Orchestra has nixed the popular instrument petting zoo at its March 15 concert (the concert itself is still on).

Saturday morning’s Plunge for Elodie fundraiser went on in a lower-key fashion at Morses Pond than planned, as the full-blown public dunk was canceled due to, you guessed it… 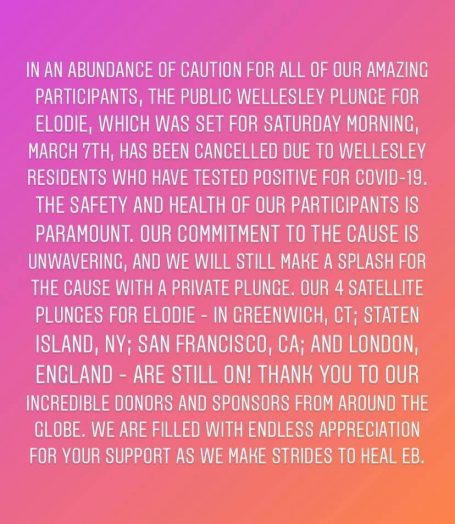