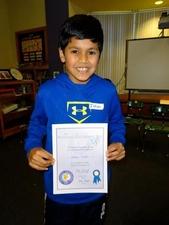 Ishan Kundu, a fourth grade student at Sprague Elementary School, knows where stuff is, and he wants National Geographic to take notice. His prowess on an in-class written geography test led him to beat out 14 finalists from Sprague school earlier this month, advancing him toward the next round of the 27th annual National Geographic Bee.

To get this far, Ishan completed a written test in class and was one of the two winners from his 4th grade class of 20.  From there he beat out a total of 14 4th and 5th grade Sprague finalists to make it to the next level

So since Kundu has shown that he could certainly find his way out of a paper bag, and without the benefit of a GPS at that, his next step is to take another paper and pencil geography test, this time in an effort to qualify for State finals. Sprague school teacher Moe Henzel, a former Teacher-Consultant for the MA Geographic Alliance and National Geographic (not to mention 1999 MA Geography Teacher of the Year), will administer the test and then submit Kundu’s answers to National Geographic, which expects competitors to know more than just which end is up. From the Nat G website, here are some examples of questions from previous years:

The North Atlantic current brings warm waters from the tropics to the west coast of which continent?

Which Canadian province produces more than half of the country’s manufactured goods?

Even if you haven’t studied profiles of Canadian provinces, you know from your mental maps that Ontario borders all of the Great Lakes and has access to the St. Lawrence Seaway. This puts it in a better position than any other Canadian province to import materials needed for manufacturing and to export finished goods. So you correctly answer Ontario.

To visit the ruins of Persepolis, an ancient ceremonial capital of Persia, you would have to travel to what present-day country?

From history books or from studying country profiles, you know that Persia is the former name of Iran, so you correctly answer Iran.

Thousands of 4-8th grade students from public, private, and independent schools have a go during finals at just such questions, and only the top 100 make it to the State Bee. If Ishan is the Massachusetts winner, he will join the other winners, one from each state, along with Guam and Puerto Rico, to go to Washington, DC. Once the geographic whizzes hit the capitol, competition intensifies.  When the field gets narrowed down to 10 finalists, television coverage kicks in, with Soledad O’Brien serving as moderator.

What’s in store for this year’s winners hasn’t been announced yet, but we’re guessing it’s similarly fabulous.