Starting to study for the Massachusetts Academic Decathlon all the way back in the summer paid off for the Wellesley High School team earlier this month, as the students won the large school division of the competition.

Tony Shu, a WHS junior who medaled individually in economics, science and other events, says “Our #1 goal this year was to turn our club into a team.” Shu, who co-captained the team with Rachel Landau and Allison Kumarasena, credits many bonding activities for turning the team into a family. About 20 students belong to the club, though only 9 get to compete.

Acton-Boxborough, which has been dominant in this event for years, actually won the overall state title and earned a chance to compete nationally in Alaska. But Wellesley, which has competed at MassDecathlon since the 1980s, is hot on A-B’s heels. The WHS team had its highest score ever this time around.

Wellesley has come in 2nd overall for each of the past three years, says Wellesley High social studies teacher Lauren Colella, who coached the team with Stephanie Welch (WHS math).

(While Acton-Boxborough technically finished ahead of WHS this year, it got pulled out of the large school division as the overall champ, paving the way for WHS to win the large school title.)

“The students are really self-motivated and they work real hard to help each other access the material,” Colella says. “Stephanie and I assist and take care of the logistical aspects of the club.”

Next up for the team: The online e-Nationals in April. 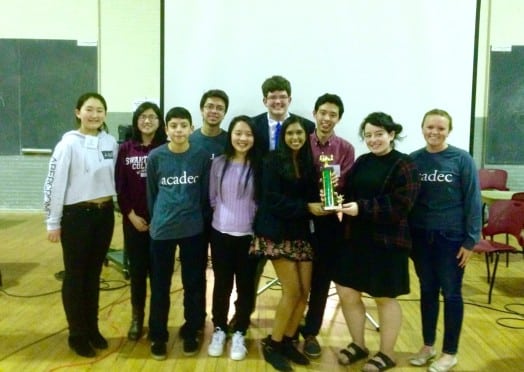