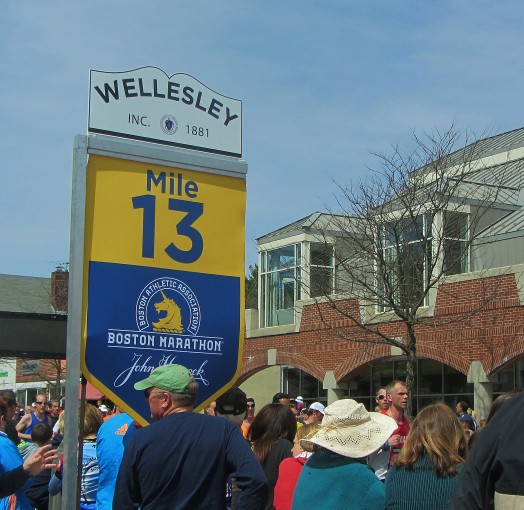 Hopkinton and Ashland can fuss about where the Boston Marathon began or begins, but there’s no arguing the fact that Wellesley is smack in the middle of the 26.2-mile course. We own from about mile 12 to 16, traversing Rte. 135 at the start and crossing over to Rte. 16 for the rest (this zippy Motiv video from Wellesley High grad and app developer extraordinaire Nicholas Peretti takes you down the course a lot faster than even the fastest runners will go).

The Wellesley Police Department wants you to know about the 120th running of the Boston Marathon on Monday, April 18, 2016.  Additional messages regarding road closures and re-openings will occur on Marathon Monday.  Follow us on Facebook and Twitter (@WellesleyPolice) for real time updates during the Boston Marathon.

The only way to cross over the route with a motor vehicle is to utilize Route 9 (Worcester Street) underneath Route 16 (Washington Street).

The roads will close between 8:15 AM and 8:30 AM on April 18, and remain closed until the end of the race.  We expect to begin opening the roads at 3:00PM.  Please note this is an approximate time for opening.  YOU WILL NOT BE ABLE TO CROSS THE RACE ROUTE WITH A MOTOR VEHICLE ONCE THE ROAD IS CLOSED.

There will be some temporary ‘No Parking’ areas that will be posted close to the Boston Marathon Route.  Vehicles that park in these temporary no parking zones will be removed and towed.

Some additional temporary no parking zones include:

Curve Street on the west side from Linden to Crest.

Crest Road on the west side from Linden to Curve.

Howe Street on the south side from Weston to Curve.

Weston Road on the east side from Linden to Turner.

Central Street from Weston to Grove

Linden Street from Weston Road to Crest Road on both sides of the road.

Wellesley Ave from Washington to Atwood

Woodlawn, near the DPW entrance

Garden Road one side to Colburn

Colburn Road one side

Chestnut Street one side

Washington Street on both sides from Grove to the Newton line.

A message will be sent out when the road is fully opened in Wellesley.