Chelsea Clinton was on hand at Wellesley College Thursday to stump for 1969 graduate of the school, Democratic presidential candidate, and her mom, Hillary Clinton. She used her 30-minute address to the crowd of about 400 to  touch on her mother’s main platforms of clean energy, gun violence, prison reform, health care, children’s issues, and infrastructure, and characterized the race to the Oval Office as “the most consequential election of our lifetime.”

In her few comments about Donald Trump, she said, “I never thought I’d see the almost-normalization of hate speech…it doesn’t represent the country I want our children and grandchildren to grow up in,” and said that her mother isn’t only about keeping America great, but that she is about keeping America good.

It wouldn’t be a political speech without an anecdote about the “just folks” of America. Chelsea told the story of a mother and her son she met on the campaign trail, both born in Guatemala,  both US citizens for 12 years. The mother said that three kids in her son’s class have said, “go back to Mexico,” and, “I can’t wait until we build a wall so that we can keep people like you out.”

During the questions and comments part of Chelsea’s visit, a mom in the crowd talked about how her little girl plays with a Hillary action figure. Impressed, Chelsea, mother of two, said, “Mental note. I need to order myself a Hillary action figure. Currently at my house we’re really into farm animals and Sesame Street, but I’m going to try to get grandma into the rotation.”

One audience member, perhaps seeking the stardust and charisma that neither candidate possesses, asked, “Why should we be excited about Hillary? Why should we be into her? To that, Chelsea fell back into criminal justice reform-higher education-health care talk, her answer perhaps an acknowledgement that in this election, there’s just not a candidate that the masses really want to get with. There’s nobody this time around with patrician good looks, a marvelous Boston accent, and a cool compound on the Cape who plays rough-and-tumble with his handsome and beautiful siblings. There’s no upright, God-fearing family man who with his wife has raised five strapping sons who clearly honor and respect their parents and everything they stand for.

Maybe you can’t be into Hillary Clinton. Let’s face it, her clothes aren’t cute. No one wants to know where she got her earrings. Her haircut is sensible, her shoes comfortable. To the crowd of the faithful, at Wellesley College, a place that must be where Hillary goes when she closes her eyes for a few minutes to escape to her “happy place,”  well, plenty seemed into her enough to vote for her come November. 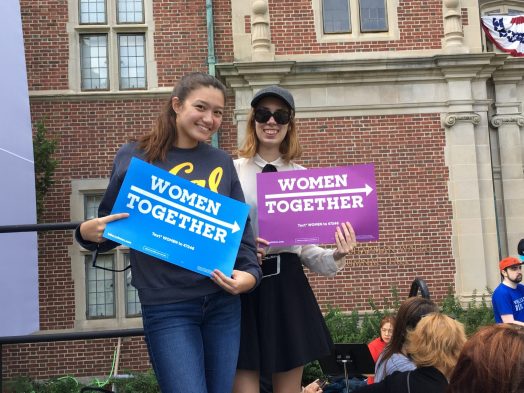