There are three things I just can’t get enough of these days when it comes to restaurants: the fast-casual concept; a modern farmhouse design scheme; and plenty of greens for the days I’m getting in touch with my inner rabbit. Tender Greens at The Street in Chestnut Hill (49 Boylston St., Route 9, westbound side), the chain’s 28th location, offers all of that along with less garden-y offerings for times when  a juicy marinated steak sandwich is more like it.

The 60-seat Los Angeles-based restaurant serves up menu items such as “plates”, that consist of one protein such as salt and pepper chicken, herb-brushed tuna, or falafel alongside your choice of five greens. Yes, one of the greens offerings is kale. I wouldn’t dare send you to a California-casual place that didn’t feature kale, that most indigestible of greens, and probably couldn’t even if I tried. Mercifully there’s also sweet, yummy butter lettuce, baby arugula, and more.

If you need something more substantial, the staff working the open kitchen are there for you, offering about a half-dozen sandwich offerings such as fried chicken, chipotle barbecue chicken, and marinated steak. Also on the menu are soups and a few sides. The restaurant’s executive chef, Todd Renner, sources local ingredients such as raw milk blue cheese from Great Hill Blue, in Marion, and microgreens from 2 Friends Farm, in Attleboro.

I got in line, ordered, and sat down at one of the 25 patio seats. They bring your meal to you on sturdy white china and then clear it away when you’re done. Diners here also enjoy eating with real flatware. But Tender Greens draws the line at linen napkins, and that’s fine. Their paper napkins are plenty sturdy enough. Also, they’re casual, but they don’t want you doing a lot of work in their house, like carrying your own food to the table and then participating in the clean-up and figuring out the recycling situation. Someone else manages those chores. That’s California hospitality for you.

I tried out the Herb Brushed Tuna plate with butter lettuce. The tuna was grilled beautifully rare and served with sea salt, lemon, and olive oil. Both the tuna and the lettuce were breathtakingly fresh. The lunch was simplicity itself. But would it hold me until dinner? That’s a big question with me these days because after a winter of indiscriminate snacking I’m now on this kick where I don’t eat between meals. I’ve put my former grazing mentality completely out to pasture.

The idea behind that grazing nonsense is that you get up and  eat a healthy breakfast then keep going all day with a small meal or large snack every two to three hours. Supposedly it’s what our ancestors did for tens of thousands of years. You know what they didn’t do? They hardly ever drove their cars from point A to point B. Plus they limited their screen time (and its associated sitting) to, oh let’s say zero.

So given my new lifestyle change, maybe I also should have ordered a bowl of roasted tomato soup with basil oil and ciabatta that the diner next to me called “intensely flavored.” Or a side order of California sprouted rice or seasonal veggies, both of which looked like tasty and filling additions. I’m still getting used to this substantial meal thing and what I really need to carry me from lunch to dinner so that I don’t end up munching potato chips while I’m making dinner and calling that “part of dinner.”

As I sat in the outdoor area, basil specks floating around in my pint glass of  lemonade, a glimpse of Hammond Pond in the distance, this Route 9 spot felt like a nice, summery place to be. Taking a look at the list of other shops and restaurants on The Street, it certainly felt like a little slice of Wellesley — we share J. McLaughlin, The Cottage, Bluemercury, Comella’s, Btone, and Miniluxe. But they’ve got plenty of other shops that we don’t have like Polkadog Bakery, Aquitaine restaurant, and Pottery Barn to name a few. There’s also an outdoor area set up with corn hole and other outdoor games for kids of all ages. And the parking was easy. 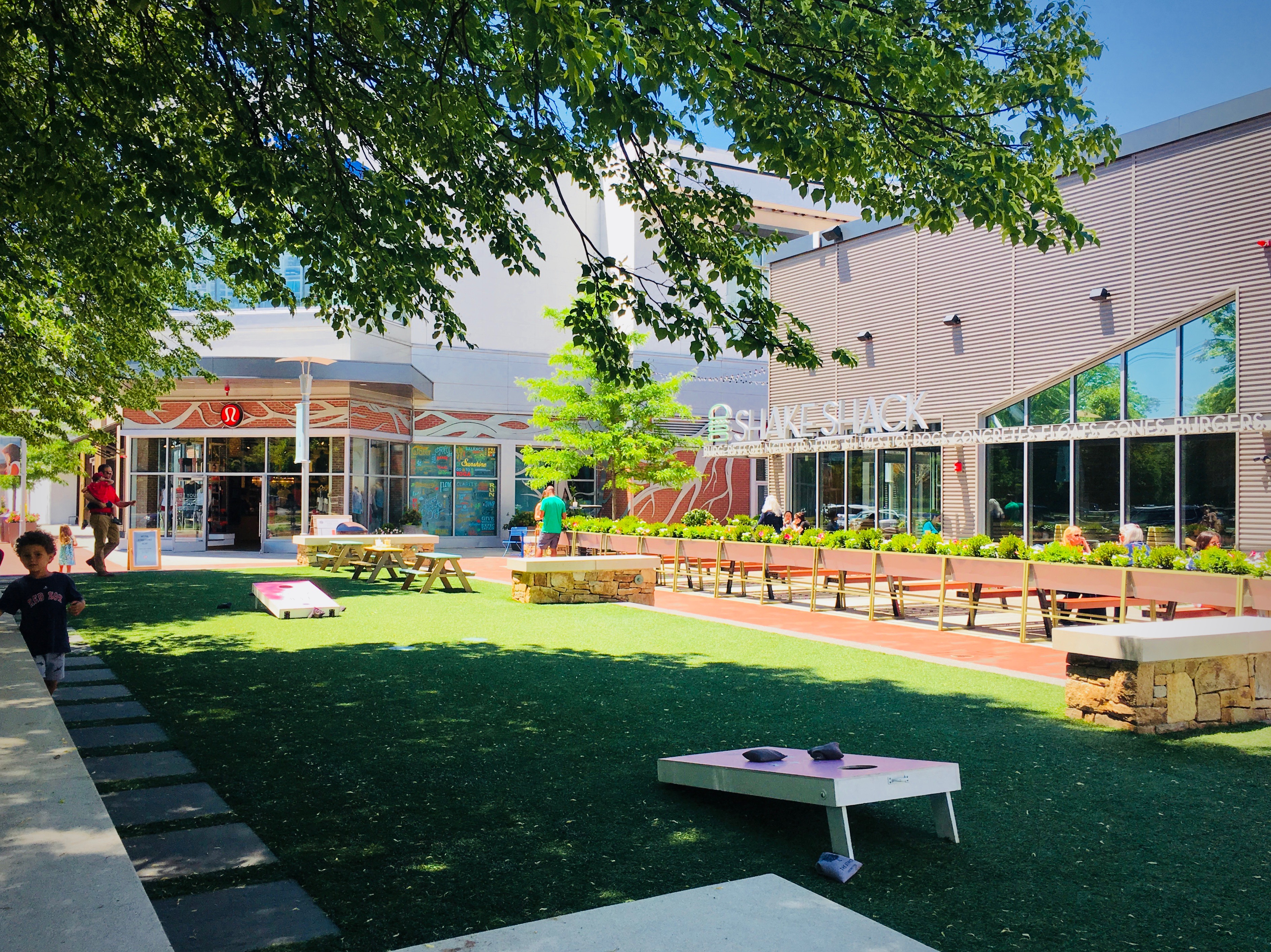