The Wellesley Police Department has arrested and charged a Boston man in connection with a firearm and ammunition found on Sept. 5 on a trail along Hunnewell Field.

Matthew Bradley was arrested in Dedham around 9AM on Sept. 12 by Wellesley Police Bureau of Criminal Investigation (BCI) detectives, Wellesley Police and Dedham Police officers.  He was arraigned at Dedham District Court on the following charge: unlawful possession of a firearm, unlawful possession of ammunition, and improper storage of a firearm. 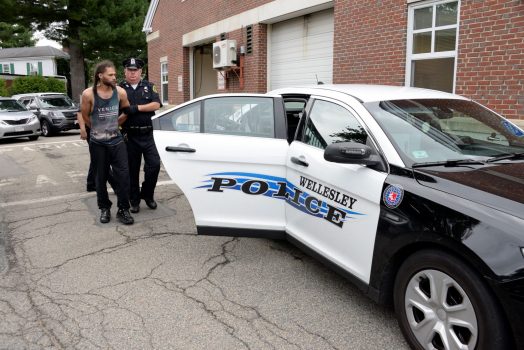 Just prior to midnight on September 4, Wellesley Police Officer Will Griffin stopped a scooter-riding Bradley for motor vehicle violations on Washington Street near the police station.  During the stop, and after being identified, Bradley fled from Officer Griffin and eluded capture.

During the subsequent investigation that followed, Officer Griffin learned that Bradley was wearing a court ordered GPS bracelet as a condition of bail from previous charges in another jurisdiction.  As Officer Griffin continued his investigation the following day, a semi-automatic firearm was found on Hunnewell Field near the Crosstown Trail.  The GPS bracelet that Bradley was wearing would later reveal that he had traveled through the same area where the firearm was found after fleeing from Officer Griffin the previous night.

Officer Griffin, working with Wellesley Police Department BCI detectives, obtained anarrest warrant for Bradley based upon the original motor vehicle charges.  Bradley was located and arrested by the Wellesley and Boston Police in Boston on Sept. 6.  Evidence gathered during that arrest led to a search warrant being obtained by detectives.  As a result of this search warrant, authorities discovered additional evidence that linked Bradley to the firearm found at Hunnewell Field, and he was arrested and charged for the additional alleged offenses on Sept. 12.