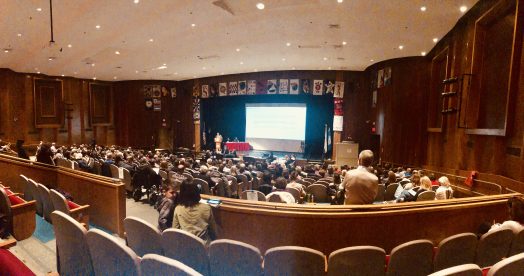 Wellesley Town Meeting on Night 2 of the annual government extravaganza passed a nearly $170M budget, including a 3.5% increase on school spending. You can review the Town Meeting Scorecard to catch up on what’s been voted on so far and watch the meeting on Wellesley Public Media.

Wellesley Public Schools Superintendent David Lussier was the star of the show on Tuesday, presenting the proposed school budget and then returning to the podium over and over to answer Town Meeting members’ questions on everything from hiring a director of diversity, equity and inclusion (What will the person actually do? Who will the director report to? Will it be a permanent gig?) to possibly replacing Macs with Chromebooks to progress on minority hiring (Lussier said the system failed to hits goal this past year, but not for lack of trying). The superintendent, operating with a “home field advantage” at the Middle School, thanked Town Meeting members for “helping me with my cardio tonight,” in reference to his frequent getting up and down.

Tension over school spending, including between the School Committee and Board of Selectmen, was a theme throughout the evening. Speakers cited the need for a better system for determining huge outlays for school facilities and services even while the town has other big non-school projects in the works. With the school system readying for a new 5-year plan, there will be plenty of discussion on the topic in the months to come.

The School Committee Matt Kelley said the committee, the Board of Selectmen and Advisory Committee need to work together going forward to ensure educational excellence is available in Wellesley. “We need to have the residents of the town weigh in on how they value that excellence [in education] and what they think is appropriate funding for the schools,” he added.

One school budget challenge is how not only to prevent falling back from where we are on school services, but to invest strategically in prepping students for 21st living and working. Lussier said his team has evolved its strategy for ensuring it has enough resources to cover variable special education-related expenses after giving back requested funding to the town last time around when special education expenses turned out not to be as high as they could have been. This was “good but problematic,” Lussier said. Not including so much of a buffer in the budget this time around — and continuing to grow the rainy day fund — could help to ensure that more money is available for general education investments, he said.

The big excitement for the night took place during a vote on whether to amend a motion on the overall town budget to include additional funds for a director of libraries across the schools. Moderator Mark Kaplan heard correctly that the Nos outnumbered the Yesses. But a standing vote was called for by Town Meeting members and that resulted in “tellers” armed with clipboards tallying the number of each after the Nos and Yesses were asked to stand up separately — and the Nos took it.

Town Meeting resumes on April 1. That promises to be fun, as items yet to be discussed include sports fields, citizens’ petitions, and more.