Wellesley’s COVID-19 numbers are generally heading in the right direction (with the exception of a spike at Babson College), though the town has reported its first case of the B.1.1.7 COVID-19 variant initially discovered in the U.K.

Ann Marie McCauley, the town’s public health nurse supervisor, said during the Feb. 17 Board of Health meeting that discovery of the B.1.1.7 case “is not surprising” and that it appears to have been community-acquired (not from traveling). The B.1.1.7 variant could be more deadly than other variants, U.K. scientists say, based on early evidence.

The other concerning COVID news in Wellesley is at Babson College, which has seen a spike in cases and has gone full-remote for 48 hours to try to help contain things. 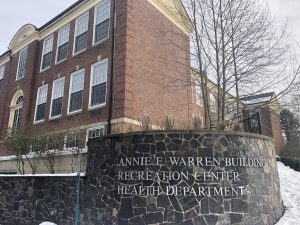 Wellesley health and town officials said they just had a good meeting with Wellesley College, which has managed to largely contain COVID-19 from spreading on its campus. Students have returned for the new semester after self-administering swab tests at home, and school officials have said that students will not be allowed to work off-campus to help protect against the virus. The school has also decided not to have its usual year-end in-person activities on campus, so there will be no swell of alumni and parents arriving in the spring—an additional hit for local businesses.

On a positive note, the town finishes up second doses for first responders this week.

Separately, a fresh message from the Massachusetts Department of Public Health has made clear to the Wellesley Health Department and those from other communities that the state is largely not relying on local health department personnel to physically get the COVID-19 vaccine into people’s arms. Rather, the state is focused on distributing the vaccine through mass vaccination sites and pharmacies, reserving local health clinics for communities at the highest risk from the virus.

Wellesley health officials are frustrated they can’t play a bigger role in distributing the vaccine since their staff has prepared for such public health needs.

Wellesley’s Health Department is working to collaborate with the Council on Aging, police, fire, Wellesley Housing Authority, and other groups within town who can help to identify truly homebound residents eligible for vaccine house calls. Wellesley Health Director Lenny Izzo says he’s worried about people claiming to be homebound who really aren’t, so the Health Department will need to take a close look at parameters from the state defining this status.

The timing for homebound vaccinations remains to be determined.