The Wellesley Public Schools WPS) bullying prevention policy has undergone increased scrutiny since the violent incident involving students last summer that led to protests at Wellesley High. Since the fall, the administration, School Committee, and legal counsel have been reviewing the policy with an eye toward ensuring it aligns with state laws as well as the school system’s overall values.

The document has been the subject of several School Committee Policy Subcommittee meetings spanning December through February.

School Committee member Leda Eizenberg summarized proposed revisions to the policy about 95 minutes into the Wellesley Media recording of the March 8 School Committee meeting. The subcommittee looked at policies from other districts and a model policy from the Massachusetts Association of School Committees (MASC) in making its changes. You can review the marked up version of the policy embedded at the bottom of this post.

The goals of the process were to update the policy to align with the latest statutory language (however old-fashioned some of its cyberbullying language may be), make the policy more detailed, and reflect the district’s core values.

Among the changes are incorporating language from the Bullying Prevention and Incident Reporting Plan into the main policy.

A proposed new section on the reporting process has been added that states students are obligated to report bullying, and that stresses that disciplinary action won’t be taken against an alleged perpetrator based solely on an anonymous report. A section on investigation procedures taken from the MASC is steeped in privacy rules, preventing those involved from knowing the disciplinary details of others, for example.

Another new section focuses on training and instruction for school employees and students. Training has been happening all along, according to school officials, but it wasn’t spelled out in the policy.

The proposed policy’s introductory wording is lengthier than that of the current policy because it gets more into the “why,” Eisenberg says. 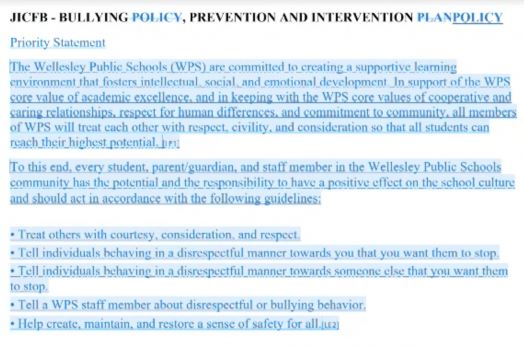 Even with the changes, not everyone will be satisfied with the policy. A student rep asked during School Committee whether there’s anything anyone can do if they think the administration fails to follow the policy. The answer was kind of: Not really, though those being disciplined can appeal.

School Supt. Dr. David Lussier said “The principal or whichever school we’re talking about isn’t going to be able to share all the details of the contextual factors behind the scenes, and so I think it is sort of fraught with that imbalance because of privacy for someone to believe, well, this may not have been implemented properly, when in fact there are many reasons that can’t be disclosed as to why certain decisions may have been made. I’m not sure how that could be reconciled…”

The Policy Subcommittee will take another crack at the policy revisions before bringing the proposed changes back to School Committee for a vote.

If you have comments or questions regarding the draft changes to the policy, reach out to the School Committee at School_Committee@wellesleyps.org

Lussier noted toward the end of the recent School Committee meeting that as promised in the fall, the school system has been working to update the policy, supplement mandatory training, and improve communications.

Specific to efforts to improve communications, he highlighted an upcoming Wellesley Education Foundation-sponsored webinar on Facilitating Social Recovery on March 31 at 7pm. 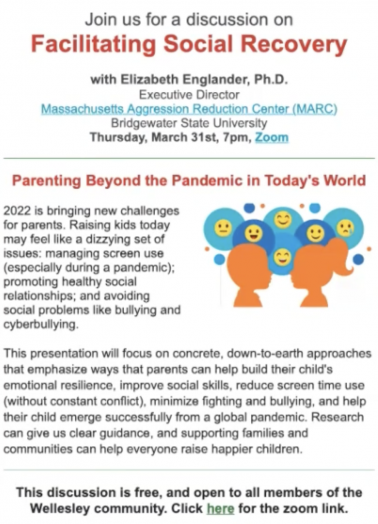