The first night of Wellesley Town Meeting this past week was pretty cut-and-dried, with motions on Articles 1 through 8.1—plus a raft of others bundled into a consent agenda—easily passing. But there was a hint of what might be to come on night two (March 29) when a Town Meeting member asked town leaders about whether any of Wellesley’s surplus monies might be considered for an “underride” that would return dollars to taxpayers (answer: nope).

Night two (see Wellesley Media recording from March 29) kicked off with the School Department’s report and pitch about why it needs roughly $85M to operate in fiscal year 2023. This was one of several departmental presentations related to Motion 2 of Article 8 regarding the town’s Omnibus Budget. The school presentation and subsequent discussion took up almost the entire 3-plus hours of Town Meeting on night two.

Anticipating questions about why it needs more than $2M above what it has spent this year—a figure that falls within the town’s 2.75% increase guideline for departments—despite continued declining enrollment, Wellesley Public School system officials were ready with answers. This included an emphasis on the fact that some 94% of the proposed budget went toward instructional and student service costs, and that the school system has been able to live within shrinking town spending guidelines in large part by reinvesting savings from staff reductions.

Superintendent Dr. David Lussier and Assistant Superintendent for Finance and Operations Cindy Mahr combined to explain that even though full-time staff positions are being eliminated in light of falling enrollment (particularly at the elementary school level), others are being hired to allow the school system to operate more efficiently and to address post-pandemic needs. For example, WPS seeks to hire 11 permanent substitutes, which administrators argue will make for a higher quality experience for students, reduce costs, and reduce logistical hassles for the schools. Also being added to the payroll via federal grants will be adjustment counselors at the pre-K-5th grade levels to help kids with their social and emotional needs. Math specialists are being added to address community concerns in that important area of learning. Lussier acknowledged: “It is a complex picture going forward.” 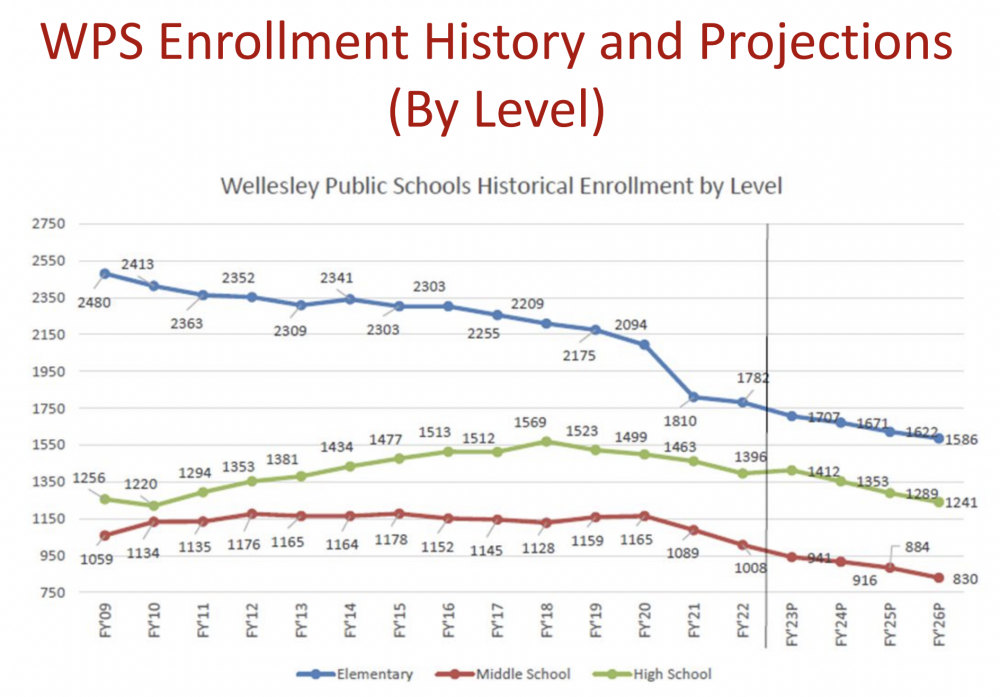 The administrators also addressed their budget needs for supporting special education, adhering to teachers’ union contracts, and for continuing diversity, equity & inclusion efforts, including the reduction or elimination of numerous student fees.

Other departments, including the library and public works, also delivered their reports and pitches. While no doubt appreciating the efforts of those entities, Town Meeting members seemed to let out a collective “Whatever” and concentrated on schools.

The Advisory Committee shared that it approved the Motion 2, but by a 9-5 split. Advisory’s Tom Cunningham said of particular concern to some on the committee were “continued annual school budget increases despite a significant and continuing decline in enrollment. This was a topic of concern in previous budget discussions, and some on advisory felt that this issue is not being adequately addressed” in light of school performance, rankings, etc.

Next up were Town Meeting members, and Royall Switzler started off the comments-and-questions section, proposing an amendment to the motion that would knock the school budget back down to the level of the previous year, roughly $2.3M less than what was proposed. “My concern is that we’re spending too much money and we’re not getting what we’re paying for,” he said. Other Town Meeting members also raised questions about spending, wondering how WPS can continue to request more funds and increase the amount spent per pupil even as enrollment continues to drop (one answer to the rising cost per pupil is that Wellesley remains in line with similar communities).

The amendment failed to pass, but did spark discussion with participation from about a dozen Town Meeting members, including a request from one that fellow Town Meeting members not compare more recent school rankings from U.S. News & World Report  to those prior to 2019, when a different methodology was used. Wellesley’s fall in this ranking has been cited by those looking for school reform, including proponents of a citizen petition on this Town Meeting warrant.

Town Meeting Member Paul Merry pointed out that just because enrollment is declining doesn’t mean a corresponding decrease is warranted in spending. “There’s not a linear relationship between the cost of the school’s services and the loss of enrollment…I’m not saying that there perhaps shouldn’t be a careful review of how money is being spent and how services are being used by students…” (Lussier later agreed with this point about the non-linear relationship between declining student population and staff/costs, noting that the distribution of the decline across classrooms and grades is a key factor in impacting school resources.)

Joelle Reidy, a parent of 3 children in the school system, argued strongly for the proposed budget. “Our children need this money, and it’s not just for learning—it’s for emotional support, for psychological support, for so many different things that we don’t understand, because we didn’t go to school in 2022…,” she said.

“The School Department seems to consistently be the source of the greatest controversy and ire surrounding the budget, and as a matter of democratic representation I think it would be advisable in light of this sort of thing happening almost every year at Town Meeting that we consider going forward viewing the school budget separately from the rest of the town [budget] because of the unique issues that it represents,” Hornung said, “and that would allow Town Meeting to vote, I think more accurately representing popular will of the community and not have to put all the rest of the town budget sort of on the same question as the school budget specifically.”

After the amendment was voted on, discussion continued related to the overall budget, and a dozen or so Town Meeting members weighed in. The focus was entirely on schools. Town Meeting members raised questions on everything from the nature of student fee reductions/increases to investments in intellectually challenging courses/resources (beyond a new maker space). A Town Meeting member also asked about staff diversity (Lussier said: “There’s still a high level of disproportionality between the diversity of our students and the diversity of staff. Currently just over 30% of our students are students of color…in terms of our staff, we’re just under 10% diverse…,” the latter percentage of which he added is as high as it’s ever been.).

In the end, Motion 2 on Article 8 regarding the Omnibus Budget passed by a vote of 175/21/1, as did a third motion on the Article.

Town Meeting resumes on Monday, April 4 at 7pm with Article 13, which is a Board of Public Works-related topic. There are 49 articles overall on the warrant. 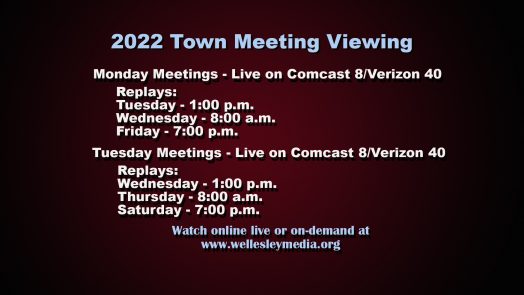