It’s been 10 years since Wellesley High School English teacher David McCullough Jr. gave his memorable “You’re Not Special” speech to Wellesley High School graduates. He’s since withstood a media frenzy, written a book inspired by the speech, had questionable imitators, and spoken again at graduation after teaching through the pandemic (about 50 minutes into Wellesley Media recording of the 2021 ceremony).

How could we not circle back with McCullough on this anniversary?

How the speech holds up: Fine, I guess. I haven’t looked at it for a long time. People mention it to me from time to time, tease me about it, compliment me about it, want to talk about it, all of which I appreciate.

Most positive thing to come out of the experience: It got people talking, which might have helped amend at least a little some of the attitudes, preoccupations and patterns of behavior I found concerning. I’ll confess I found all the attention a bit jarring, but it brought me an opportunity to write a book, which I enjoyed very much.

What would be different if you delivered it today: Well, graduation speeches—at least as I think about them—have, or should have, their moment. They’re of their time. The speech of 2012 had its moment. I’ve given three or four since, including one a year ago at dear old Wellesley High, each of which have had their moment, too.

Still getting inquiries: I still hear from people about it fairly often, which is nice. Life, though, as it will, has gone on since then, but I’m happy it still means something to at least a few people out there. 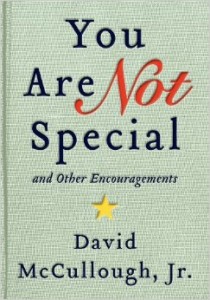 The book: The book was a challenge and a pure pleasure to write… a most gratifying experience all the way around. It was translated into eight or ten languages, too, and a best seller here and in other countries. It brought the opportunity to travel in the US and Europe, and I met many, many very nice people. And, yes, I do hope to sit down and write some more one day.

Pandemic teaching: Well, it was better than nothing, but not much… a struggle for kids and teachers alike, with heavily diminished returns. In the end, though, we did manage to make it a productive experience, I think—and certainly we were all forced to take a fresh look at what we were doing, why and how, and try by necessity new approaches, which remains beneficial.

(We’ll never forget our site being brought to its knees as a result of all the traffic generated by running McCullough’s transcript a few days after the speech in 2012.)