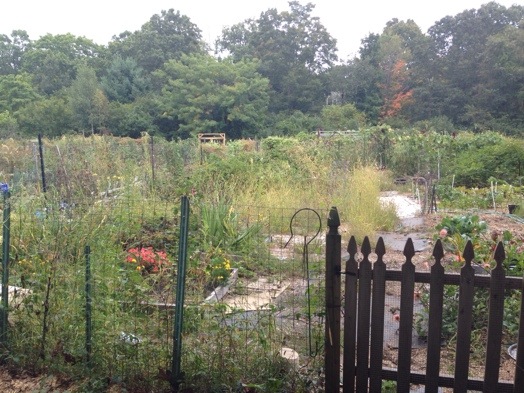 Wellesley College, which is undertaking a $365 million campus renovation, has notified neighbors and Wellesley College alumnae that it is exploring what could be dramatically different uses for the North 40 property where the Weston Road community garden now blooms. Neighbors are concerned and are contemplating a petition, “not so much against the potential sale [of the property], but against the change in the deed and the potential irresponsible development of remaining open land in Wellesley,” one resident wrote to us. Another garden club member worries about the threat of new McMansions popping up along the road.

More than 50 plots on the land are listed on the Weston Road Garden Club website, and some gardeners contribute significant produce to the Wellesley Food Pantry. Wellesley College students also use the land for hands-on organic gardening education.

In a letter to residents, Wellesley College VP for finance and administration Ben Hammond writes that “Wellesley College is currently considering the future of a number of parcels, including one we own in your neighborhood,” and invites residents to a meeting on May 6 at 7:30pm at the College Club to learn more. He goes on to explain that the deed for the property has restricted new uses for the land, but that the school has filed a petition with the state supreme judicial court seeking flexibility. Hammond stresses that the college, if granted its request by the court, would seek to partner with responsible development partners.

Separately, Wellesley College President Kim Bottomly issued a letter to alumnae to inform them of the activities surrounding this property and inviting them to the May 6 meeting as well.

Wellesley actually has two community gardens, the other on Brookside Road. It is overseen by the town.