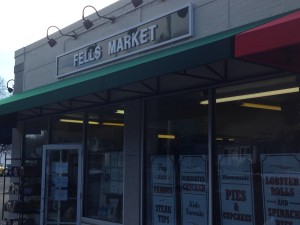 It’s official: You can now pick up beer and wine to go along with your steak tips or other items from Fells Market in Wellesley, which for the first time is allowing retail establishments to sell alcoholic beverages for off-site consumption. (Also see: “Fells Market first official “guinea pig” okayed for retail sale of wine/beer”)

The Townsman swung over to 326 Weston Road on Friday to document the action, including the historic first purchase of booze at the store.

“A six-pack of Mayflower beer, a 12 pack of Harpoon Summer Ale and a bottle of Sean Minor Cabernet Sauvignon, sold to a Wellesley resident and friend of the store’s owners ended Wellesley century-plus run as a dry town just after 5:30 p.m. on Friday.”

The Wellesley Wine Press dropped by as well and headed to the back of the store to see what was available. Blogger Robert Dwyer describes the wine mix as 50-50 between reds and whites, ranging from affordable to high-end (so, affordable to many here).

Visiting the beer fridge, he writes: “At the other end of this newly expanded area is a beer refrigerator. I went for a Clown Shoes Clementine White Ale. $9.99 for a 4-pack. Oustanding! They’re not yet 100% stocked, with staples like Bud and Coors  missing, but expect them in early next week: Peter [one of the owners] says he’s a Bud guy.”

The Cheese Shop, Roche Brothers and Tutto Italiano are planning to compete with Fells Market on the wine/beer front soon, as they all have received the town’s blessing.