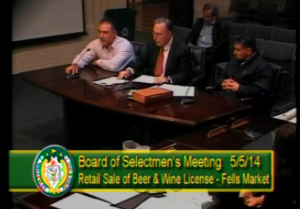 The Wellesley Board of Selectmen on Monday gushed over Fells Market’s efforts to push for changes to town bylaws allowing retail sale of beer and wine, and unanimously voted to approve the grocery store’s “incredibly complete” application and “wonderful space”. Those at the meeting agreed on the appropriateness of Fells Market (326 Weston Rd.) getting the first such license.

The market now needs to get an approval from the state’s Alcoholic Beverages Control Commission and a few nods from various town departments, but should be selling alcoholic beverages before long (See “Sneak Peek at Fells Wine Section”). The state approval could take anywhere from a few weeks to a couple of months if all goes as expected.

The Board of Selectmen members twice referred to Fells Market as the “guinea pig” for this big change in Wellesley retail operations that Town Meeting and town voters overwhelmingly supported. Roche Bros., the Cheese Shop and Tutto Italiano have all filed applications (here’s a look at what they need to fill out), and a newcomer — a specialty shop called Bee’s Knees coming to the 576 Washington St. development at the former Wellesley Inn site — has filed a preliminary application. Only 6 licenses are up for grabs.

As noted by David Himmelberger, the attorney representing Paul and Peter Katsikaris of Fells Market, patrons of the shop had inquired many times about being able to buy a bottle of wine with their roasts or other foods, and now they will get their wish. Fells Market has been in business since 1981.

The market will also be able to deliver alcoholic beverages, though the plan is for deliveries to follow orders at the store, such as to accommodate people having parties.

RELATED: Fells Market Approved, Who Else is Going for a Wine Retailer License in Wellesley? (Wellesley Wine Press)