And just like that, we are open for business. pic.twitter.com/XG5B4hRm8z

The rare Wellesley business on wheels, which recently obtained its license and passed inspection, is run by Needham’s Sam Rubin, who just graduated from Ithaca College with a degree in communications.

“I worked at a hot dog stand [called Dog Gone Ron’s] for two summers in Needham at the Mobile Station with Erik Wegner and I really loved that job and saw how profitable it could be. This is what made me want to start my own hot dog cart,” says Rubin, who owns the brand new cart and can usually be found working there with his dad, who helped navigate Wellesley’s regulations while Sam was away at school.

Sam’s offers all beef hot dogs (and all the fixings such as sauerkraut, brown mustard and even sriracha sauce), chips, soda, and water. Look for Rubin to get creative in coming weeks with homemade specialty condiments and themes such as Chicago- or Cajun-style dogs. Hot dogs cost $2.50, and a combo meal of two dogs, a drink and chips costs $6.50.

“There aren’t a lot of places where you can get a lunch for under $7 in the area,” Rubin says. “The hot dogs are very tasty and can be even tastier when people are creative with the condiments we offer.”

Rubin’s permit allows him to park the cart anywhere between the Reidy and Lee diamonds on Washington Street, and he says things have been busiest so far during baseball games at Reidy. He’s looking to set a regular schedule, but is feeling things out for now. Rubin tweets out where his cart will be each day, and not surprisingly given that he was a communications major, the hog dog cart owner also has set up Facebook and Instagram accounts to spread the word about his business.

Rubin is also permitted to bring the cart to Morses Pond, though is awaiting a final OK from the Natural Resources Commission.  Wellesley officials from the police, health and Selectmen’s offices have all been helpful during the process of getting the business up and running, he says. (Now if he only could get one of those remaining retail alcohol sale licenses from the town…not that you’d be able to consume the wine or beer on site.)

You might recall that Captain Marden’s had its Cod Squad truck parked at the former Whole Foods parking lot a while back, but wound up taking its business elsewhere, complaining that the licensing process in Wellesley was too costly and time consuming. Wellesley’s rules for mobile food businesses were put in place early last year.

Some might also remember an earlier hot dog stand in Lower Falls dubbed Mike’s Weenie Wagon. The wagon, which I was told had been  operated by a local firefighter, disappeared around the time that the Grossman’s store went down and construction started on Waterstone. In fact, I asked one of the developers about the wagon back then and he cheekily replied that “My frank answer is that I have been known to sneak a weenie myself once in a while. In fact, I even had the attached logo designed as we were thinking of a name for our project. However, for better or wurst we have not heard anything about the wagon lately….” 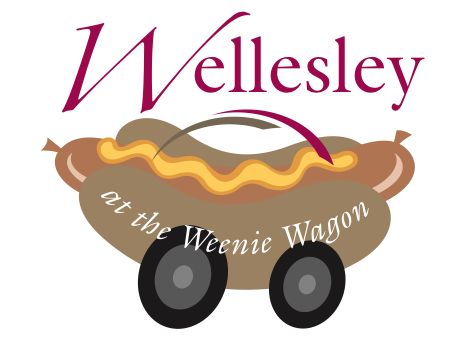