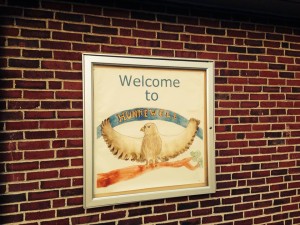 The new morning routine at Hunnewell Elementary School in Wellesley aims to settle kids down before they head into class by having them socialize on the blacktop and then recite the Pledge of Allegiance. But some parents are miffed that their children aren’t allowed to run around and expend some energy on school grounds before classes begin (“Isn’t it better for the children to use up some energy before entering school?  This morning some children were reprimanded for running!” one parent wrote to us the day after school started.).

According to the new school rules outlined on the PTO website “Students are expected to stay on the blacktop between 8:15 and 8:30AM.” Students previously were allowed to run around the grounds with balls, etc., but were not allowed to go on playground equipment, which requires supervision during school hours.

While Hunnewell gave parents a heads up about the new rules in advance of school starting, not all got the message, so there were was some confusion on opening day. Principal Ellen Quirk said she received both positive feedback about the new rules as well as questions and concerns, so followed up with a note to parents explaining the new rules. Quirk has also arranged for a meeting with parents this Friday as well to discuss the topic, according to one mom who emailed us.

I spoke to Quirk last Friday and she said the new rules are part of an overall plan to streamline arrival and dismissal, and were the result of discussions with staff and parents. Teachers in particular said that they wanted to improve upon arrival and dismissal, which could get chaotic with kids coming in and out of various doors. “We wanted to use the arrival time after 8:15am as transition time in what we’ve nicknamed the Morning Mingle, a chance for students and teachers to gather and chit-chat and take part in quieter games before lining up, saying the Pledge of Allegiance (which used to be conducted inside) and coming in. This morning I saw several girls sitting in the Foursquare area playing a nice hand-clapping game.”

The school nurse also cherished the idea of fewer visits by injured students even before school started.

Quirk said the new rules aren’t designed to take away from fun and games during the day, with 2 “robust recesses” allowing for that. She also pointed to the successful BOKS exercise program that some kids and parents take part in during the morning.

Each elementary school in Wellesley has leeway to handle morning activities in their own way, depending in part on what their facilities allow, though Quirk says administrators from the schools meet regularly to share best practices and to try to keep some things consistent.

It sounds like the Hunnewell staff and parents will have a chance to clear the air Friday (and perhaps again during their Ice Cream Social on Friday night). Meanwhile, we were reassured when one parent told us that kids are now actually allowed to run in PhysEd class, something our Hunnewell grads claimed was not approved just a few years ago…