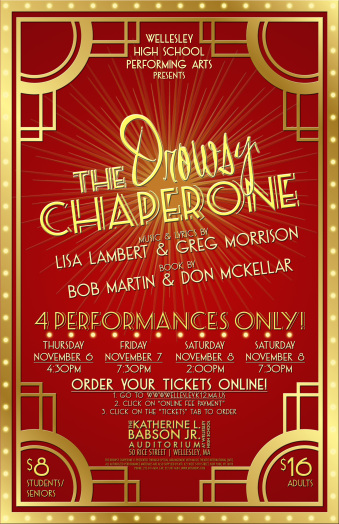 Wellesley High School’s 2014 fall musical will be the Tony award winning show The Drowsy Chaperone, which tells the story of a theater fan,whose favorite 1920’s musical comes to life on stage while he plays the original Broadway cast recording for the audience.  At the wedding weekend of a former show girl, a cast of characters engage in a series of humorous mishaps that include cases of mistaken identity, gangsters disguised as pastry chefs, bad French accents, blindfolded grooms on roller skates and a chaperone who drinks a bit too much.

Led by veteran director and WHS drama specialist Stephen Wroebleski, music director Kevin McDonald and choreographer Lauren Schneider, the cast of thirty-eight students has been rehearsing for the production since early September.  The show will feature an orchestra of Wellesley High School students under the direction of Steve Scott.  The show will be performed at Wellesley High School, 50 Rice Street Wellesley, Mass.

For tickets and more information:

Go to www.wellesley.k12.ma.us; click the “Online Fee” payment button (lower left side); click on the “Tickets” tab at the top of the page and select your performances and seats.