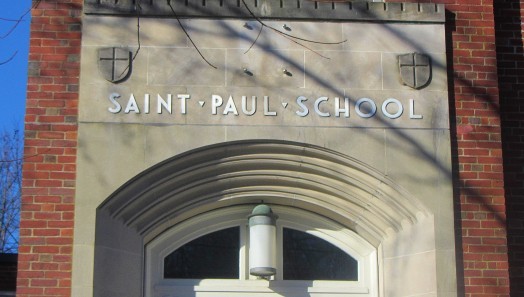 We’d been hearing rumors that St. Paul School at 502 Washington St., in Wellesley would not be opening this Fall. Unable to reach the school during its limited summer hours today, we put a few questions to St. John School in Wellesley Hills, and was redirected to the Archdiocese of Boston. Miraculously, in between the time we did that and the time we started to write up this post, we saw that St. Paul School had posted this announcement on its website.

For 60 years, St. Paul School faculty, staff and administrators have worked in partnership with parents to build a faith-filled Catholic school experience for students in PreK through Grade 8.

Over the past several years, St. Paul School has faced a steady decline in enrollment. An attempt to secure solid commitments from parents for the upcoming school year was not sufficient.
Sadly, it is not possible for St. Paul School to open in September.
We are sorry to share such difficult news, and appreciate the efforts of all who did their best to keep the school open. We will do everything we can to support everyone involved in hopes of easing the transition forward.
Should you be interested in exploring Saint John School, there will be an Open House for St. Paul families on Monday, July 27, from 6:30 – 8:30 pm. If that time is not convenient, or if you would like additional information, please contact Judy Lewis, Director of Marketing and Admissions at jlewis@saintjohnschool.net or 781-235-0300.

Please visit the Catholic Schools Office website for more information on other Catholic schools in the area. We offer our heartfelt gratitude to our St. Paul School families, and to our dedicated teachers, aids, and administrative staff for your commitment to Catholic education.

One parent, Chris Chan, says his and his wife’s twins attended pre-K at St. Paul last year and were going to enter kindergarten at the school this fall. “This abrupt, unexpected announcement in late July has literally made us scramble to find a new school for them.”

Chan described the leadership/management at the school, as well as communication with parents, as  “a total mess.” School closure was raised as a possibility in March due to declining enrollment, he said, though after parents responded with $200 deposits per student, they were assured the school would open this fall. Following the departure of the principal and pastor, the new pastor reassured parents the school would open this fall, but then recently sought a $1,500 deposit per child to start school, and parents balked, resulting in the closure announcement, Chan said.

More reaction to the school closing can be found on our Facebook post, where one observer wrote: “The school might have survived another 60 [years] had there been real support from the Archdiocese and permission to conduct a multi-year recruitment drive in surrounding towns. Unfortunately the church just isn’t interested in suburban Catholic schools.”

We’d heard rumors of the school (and the church itself) being vulnerable as far back as two years ago in the wake of Father Fitzgerald being transferred from St. Paul after serving as pastor there for 11 years. The Boston Catholic Insider blog at the time suggested at the time that moves might be afoot to merge the St. John and St. Paul schools.

Beyond the enrollment issue, what else happened? Well, it’s no secret that the two parishes, like many others throughout the Archdiocese of Boston, officially became partners in a Catholic Collaborative as of June. The Collaborative is a grouping of parishes (typically two or three in close proximity to one another) partnered together for the express purpose of evangelization.

For the Collaborative’s goals, and in response to what the church has come to call their four deficits, evangelization is defined as sharing the Gospel with Catholics who have heard the message before “but need to hear it in new ways in order to be able to embrace it.”In other words, to a large degree the Collaborative is a looking within thing, rather than an attempt to convert those who are not already baptized, ready-to-roll Catholics.

That last one isn’t just a Catholic guilt trip. In 1970, some 70% of self-identified Catholics went to Mass on a weekly basis. Now, about 16% of self-identified Catholics are at Mass on any given weekend. The shake-up plan is a mission to call the masses back to mass and streamline operations if need be in order to help the faithful embrace the the faith, rather than just identify themselves as Catholic and leaving it at that.

Those four deficits represent a whole lot of harsh reality, and it appears that the leadership of St. Paul’s and St. John’s parishes and schools, faced with a shortage of students, has decided one of the ways to honor the new collaboration is in the form of a shutdown of St. Paul school.