Wellesley town offices, libraries and schools, and the RDF are closed on Monday, Jan. 18, in honor of Martin Luther King, Jr. Day.

You can start your day at the World of Wellesley’s MLK Annual Community Breakfast Celebration, which takes place at Wellesley College’s Alumnae Hall at 8:30-10am. Keynote address will be by Dr. Yves Solomon-Fernandez, interim president of MassBay Community College. The Wellesley High Step Team will perform as well. Tickets are $30 for adults and $20 for students, and may be purchased at the door. RSVP to worldofwellesley@yahoo.com.

Another way you can celebrate MLK’s birthday is by attending an event at Schofield Elementary School on Monday from 11:30am to 1:30pm that will feature interactive activities, plus pizza, and crafts.  RSVP To: worldofwellesley@yahoo.com 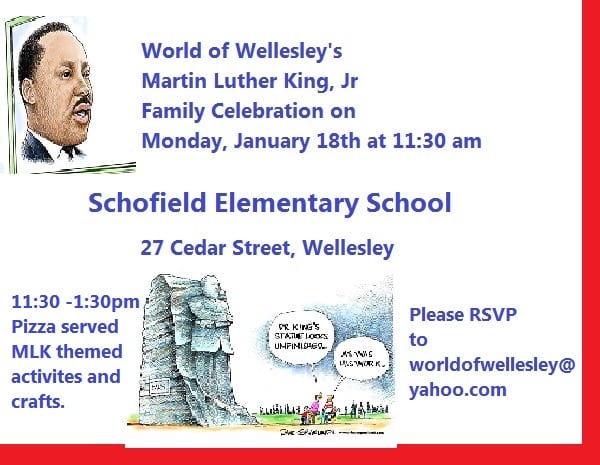 Also, something to follow up on after the holiday:

*Babson’s annual Martin Luther King Legacy Day takes place on Feb. 17 and features a keynote address by Michele Norris, an award-winning journalist with more than two decades of experience. She is currently a host and special correspondent for NPR.  Previously, Norris served as co-host of NPR’s newsmagazine All Things Considered, public radio’s longest-running national program, with Robert Siegel and Melissa Block. Norris began hosting the program in December, 2002 and stepped away from her All Things Considered duties during the 2012 presidential campaign.  While on sabbatical, Norris spent a time traveling the country and developing two successful initiatives: The Race Card Projectand NPR’s Backseat Book Club. Her new role will allow her to continue this work while producing in-depth segments for all NPR programs.