After a school vacation break, a refreshed Wellesley Town Meeting was right back at it this week mulling another significant proposed bylaw addressing the changing face of the town’s housing market.

The Wellesley Historical Commission has been gathering public input on the concept for this newest bylaw for some time now, including through a petition posted last summer.

The Commission has cited the town’s comprehensive plan as recommending that a demolition delay be imposed on homes with possible historical significance, and Commission chairman Arvid von Taube apologized on behalf of the Commission for taking so long to bring such a bylaw proposal to Town Meeting.  Fellow Commission member Grant Brown also pointed to the fact that all of Wellesley’s neighboring towns have such a practice — and that many are expanding those rules. “That Wellesley is an outlier is widely known,” he said.

The fact that Wellesley hasn’t had such a rule has lured many a developer to town to snap up teardown targets and plop down giant replacement homes for a relatively quick profit. More than 614 homes have been torn down in Wellesley since 2007, and currently there’s a teardown every four days, according to the Commission. The bylaw would seek to protect “the Wellesley we know and love but which is evaporating before us every single day with each teardown that contributed to our historic fabric,” von Taube said. 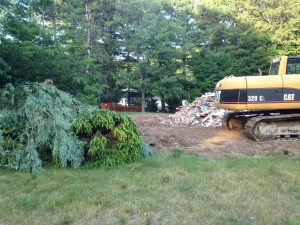 The citizen and town meeting member discussion that followed presentations by von Taube and Brown included numerous testimonials regarding the demise of Wellesley’s historic and diverse housing stock — a housing stock that has been an attraction to many in moving here. Those apprehensive of the bylaw, or straight-out against it, worried that the decisions of the town as to what is or is not historic could be too subjective and could burn those who really need to sell their homes in a hurry. And that included some on the Board of Selectmen, which voted 3-2 against the bylaw. Some suggested that a continued influx of larger homes is just a reality and that hopes of Wellesley returning to a time when affordable starter homes would be among the mix are deluding themselves, with even basic Capes going for more than $1M.

The Historical Commission’s reps stressed that the bylaw is not a ban on teardowns of homes built before Dec. 31, 1949 (the date specified in the bylaw) nor “anti-development”, but rather presents an opportunity to pause and have a conversation about properties that would preferably be preserved before it’s too late to save some of them and perhaps the trees surrounding them. The Commission’s hope is that the bylaw could result in more renovations and additions, rather than demolitions.