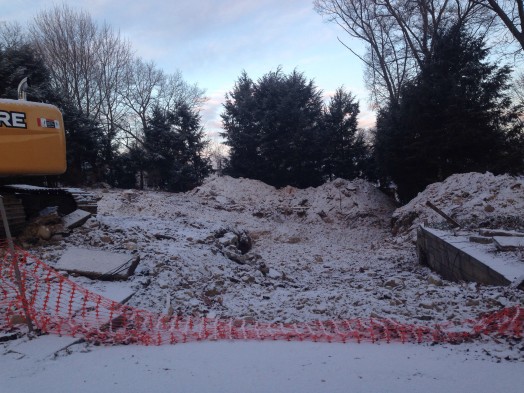 Fed up with the torrid pace of teardowns of historically significant buildings in town, the Wellesley Historical Commission has launched a petition online to gather support for a possible Historic Preservation Demolition Review Bylaw. The Commission cites adverse town character and environmental impacts related to teardowns.

In posting the smart growth petition to share with town government, the Commission refers to the town’s 2007-2017 Comprehensive Plan, which points out the challenges of maintaining Wellesley’s character in the face of teardowns and mansionization.

Wellesley has established a Large House Review process, but teardowns such as the one last week on Kenilworth Road continue to take place regularly. We’ve heard rumblings that some property owners have attempted to preserve historical homes but have resorted to teardowns when unable to get town boards to bend on proposed additions.

While the Historical Commission has no power to stop teardowns, it does try to at least make property owners aware of any historical significance if it becomes aware of possible changes to buildings. The potential bylaw would formalize a review process during which town officials and property owners might work out agreements that would preserve at least components of such structures.

As the Commission likes to point out, all of Wellesley’s surrounding communities such as Natick, Dover, Needham, Newton, and Weston have demolition review bylaws. Also, a survey conducted by the Wellesley Planning Board’s Residential Development Working Group late last year found that almost three quarters of respondents said they were concerned about the number of teardowns in town and the impact of new construction on the town’s character.

A Wellesley Townsman review earlier this year of the teardown situation showed that 95 teardown permits were issued in 2015, way up from 13 back in 1991 when a demolition delay bylaw nearly passed at Town Meeting.