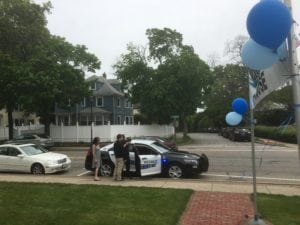 On Wednesday, August 23 at 2:30 p.m. Officer Knapp stopped a grey Buick for a revoked registration.   A query of the driver’s information showed an active warrant issued by South Boston District Court.  He was taken into custody, transported to the station, booked in the usual manner, afforded all rights and released on bail.

On August 24 at 11:10 a.m. Officer Dixon was conducting traffic enforcement on Worcester Street by the Longfellow Pumping Station.  He observed a black Chevrolet sedan pass his location and conducted a random query of the vehicle’s registration, which indicated the registration was revoked and there was an active warrant for the registered owner of the vehicle.  Officer Dixon stopped the vehicle and spoke with the operator and registered owner.  The operator was taken into custody, and while he was gathering his personal belongings from the vehicle the officer noticed that there were several gift cards located throughout the vehicle.  These items were seized in relation to the warrant.  A driver’s license, which did not belong to the operator, was also located in the vehicle.  Officer Dixon spoke with the owner of the license and learned that his wallet had been stolen from a locker at a fitness club in Malden.  The operator was transported to the station, booked in the usual manner and transported to Dedham District Court.

On July 27, 2017 at 10:00 a.m. Officer Lindelof spoke with a male reporting party at the police station regarding fraudulent use of a debit card.  The reporting party stated that he noticed a charge on his bank account from Home Depot in Watertown in the amount of $722.11 on July 26, 2017 which he did not make.  He indicated that he had his car repaired at a dealership in Watertown a few days prior to the charge at Home Depot being made.  Officer Lindelof spoke with Home Depot Loss Prevention employees and officers from other police departments and was able to identify a suspect in the case.  Officer Lindelof requested a warrant for a suspect for Identity Fraud, Larceny Over $250, Misuse of a Credit Card, Larceny of a Credit Card, Forgery of Credit Cards and Receiving Stolen Property.  On August 24, 2017 at 10:30 p.m. Officer Lindelof, along with Detectives from the Wellesley Police Department and Officers from the Watertown Police Department located the suspect at the Home Depot in Watertown.  He was taken into custody, transported to the station, booked in the usual manner, afforded all rights and held on bail.

On August 26, 2017 at 2:40 p.m. Officer Shore was conducting traffic enforcement on Worcester Street near Washington Street.  He conducted a query of a Honda sedan’s registration which showed that the registered owner’s license was revoked.  Officer Shore stopped the vehicle on Worcester Street near Alhambra and confirmed that the operator was the registered owner of the vehicle.  He was taken into custody, transported to the station, booked in the usual manner, afforded all rights and later released on bail.

On August 21, 2017 at 4:40 p.m. Officer Wall spoke with a male party about a fraudulent credit card account being opened in his name.  He had contacted the bank and advised them that he had not opened the account.  They indicated the account was opened online and it was suspected to be fraudulent and was frozen immediately.  The reporting party has not suffered any financial loss.  He has checked his credit report and accounts and has not noticed any other fraudulent or suspicious activity.

On August 22, 2017 at 12:10 a.m. Officer Rosenberg spoke with a parent at the police station who wished to report their teenaged daughter missing.  The reporting party indicated that the teen was in Newton, but she was unsure where and was concerned about her safety.   Officer Rosenberg attempted to make contact with the teen via cell phone and was unable to do so.  The teen was entered as a missing person and at 1:50 a.m. the Newton Police Department had responded to a party and located the teen.  She was reunited with her mother and Officer Rosenberg provided her with information about filing a Child Requiring Assistance petition through the Dedham Juvenile Court.

On August 22, 2017 at 5:20 p.m. Officer Keenan was dispatched to a gas station on Washington Street in the falls for a report of a dispute between the gas station attendant and a customer.  The customer had attempted to purchase gas the previous day and there was an issue with the pumps authorizing the credit card so she was unable to purchase gas.  She left the gas station and when she pumped gas at another gas station learned that her gas cap was missing.  She believed it had fallen off the vehicle when she left the gas station in Wellesley and she wanted them to replace the gas cap.  After speaking with the employee it was agreed they would replace the missing gas cap.

On August 23, 2017 at 1:30 a.m. Officer Amalfi was conducting security checks of businesses and located an open door to a business and noticed that the glass in the door had also been smashed.  Officer Amalfi spoke with an employee later in the morning and learned that 6 computers were taken from the business.  Detectives were notified and responded.  The incident is under investigation.

On August 25, 2017 at 11:50 a.m. Officer Gover took a report about two fraudulent checks being passed at a bank on Washington Street in the hills area.  The report is incomplete at this time and no further information is available.

On August 25, 2017 at 12:05 p.m. Officer Joseph spoke with a male reporting party from Sheridan Road about fraudulent use of his credit card.  The male party indicated that there were two attempts to withdraw money from an ATM in Philipsburg, St. Martin on August 20th and 21st.  The first transaction for $306 was approved, but the second transaction for $206 was denied.  Additionally, a fraudulent charge of $21.81 was made in New York on August 20th.  The reporting party had notified the bank and was refunded the $306.  There are no suspects.

On August 26, 2017 at 1:45 p.m. Officer Shore spoke with a male and female party who stated that sometime between 5:15 p.m. and 8:30 p.m. on August 25th an Apple MacBook Pro and a pair of shoes were stolen from their vehicle.  The male reporting party stated he had run several errands in Attleboro, Needham and Wellesley during that time period and did not notice the laptop missing until the morning.  There are no suspects.

On August 27, 2017 at 2:26 p.m. Officer J. Popovski spoke with a reporting party on Hunting Street about a tree from their yard that had come down causing damage to property in their neighbor’s yard.  The neighbor’s two vehicles, two fences, an outdoor table, child’s play structure and possibly a garage were damaged by the tree.  Officer Popovski provided them with phone numbers for several emergency tree removal service companies.