Babson College on Friday morning moved its 25-ton globe to a parking lot on its Wellesley campus, where the landmark will be refurbished before settling into a newly created park across from the student center. Centennial Park, to be opened next year, will help Babson celebrate its 100th anniversary and will be another piece of a major campus transformation involving the sports/recreation complex, the library and a new innovation hub

Babson dedicated the globe back in 1955 and the 28-feet-in-diameter sphere has since fallen into disrepair even after at least one makeover.

The school hopes to get the historic globe spinning again — something the orb hasn’t done since the 1990s.

Here’s what the space next to Coleman Hall, former home of the Globe, looks like now: 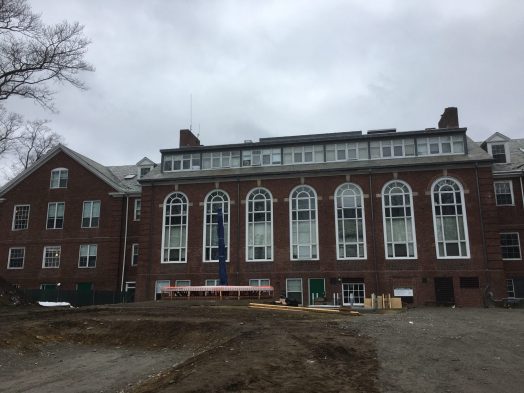 The globe is one of the largest of its kind, so its move on Friday made for some great video. News crews took to the sky to grab footage of the globe’s cross-campus trip.

Though perhaps even cooler than that footage is this video shared earlier in the week by Babson about what the inside and underside of the Globe looks like: