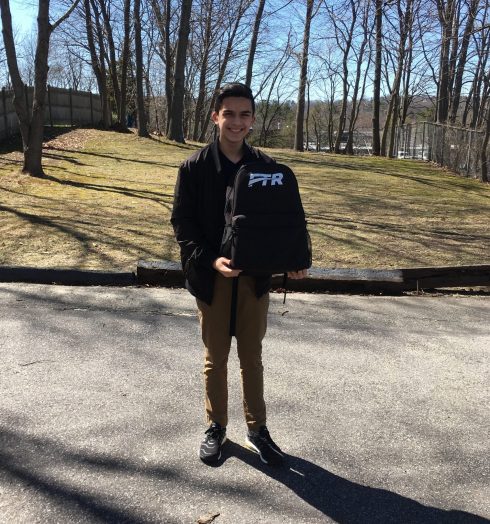 Wellesley Middle School 8th grader and running enthusiast Felipe Lopez has challenged himself to a race: He has until April 20th to raise $7,500 through a crowdfunding campaign to produce a backpack designed with runners in mind.

The For The Runners (FTR) backpack that the 14-year-old has been designing is not only intended to hold shoes and other items needed by runners, but it’s also being built so that you can strap it on and go for a run without the stuff inside the backpack slipping around the whole time. Those pledging $25 on the Kickstarter campaign will get a backpack this summer if the venture gets fully funded.

As someone who has run with a laptop in a backpack between home and work, I can tell you that it’s no fun being pounded on by a Macbook mile after mile. Not to mention that straps inevitably break when undertaking this slightly unwise endeavor.

Lopez, who plans to run for the WMS track team this spring, says the idea for the backpack came to him last fall and that he works on his FTR Sportwear concept every day, and is now cranking up the marketing side of things. He’s already joined forces with a manufacturer in China to pump out a few prototypes. Pretty much a 1-man operation, Lopez designed FTR’s slick website, too.

Lopez acknowledges that designing the backpack hasn’t been easy. He writes on his Kickstarter page that: “It has been difficult to make the backpack perfect, as the size is very hard to get right and the material has come under scrutiny. We switched from the previous material which was too coarse and stiff to ‘900D Gucci Nylon’ which is a softer, more premium material.”

This isn’t Lopez’s first entrepreneurial venture. He’s dabbled in web design and T-shirts, and sells everything from trading cards to sporting goods to used books on sites such as TCGPlayer.com, eBay and Amazon.

Asked about how much adult assistance he’s received in this venture, Lopez replies: “To be honest, little to none. The idea and design features for the backpack were all drawn by hand in a notebook. I’ve taken suggestions to improve the backpack from adults and others, but all decisions are ultimately made by me.”