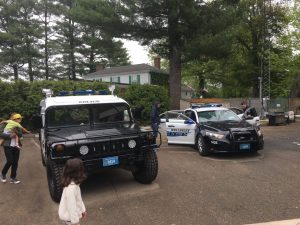 On July 2, 2018 at 9:15 a.m. Officer R. Poirier was dispatched to Eaton Court for a report of a theft from a motor vehicle.  He spoke with a female party who stated her vehicle was parked in the municipal parking lot on Eaton Court from June 30th and when she returned to the vehicle she noticed the front passenger window had been smashed and discovered her backpack, sneakers and tote bag had been removed from the vehicle.  There are no suspects.

On July 2, 2018 at 9:40 a.m. Officer Lindelof spoke with a male reporting party at the police station.  The reporting party stated he is a lifeguard at Morses Pond and on July 1, 2018 his wallet was stolen from the guard house while he was working.  Some of the items contained in the wallet were located in a nearby trash barrel, but the wallet itself and $100 in cash were not located.  There are no suspects.

On July 3, 2018 at 2:03 p.m. Officer J. Popovski spoke with a female reporting party who stated that she was looking for technical support for her Kindle devices and inadvertently called a fraudulent Amazon customer service number.  The individual that answered the phone took the reporting party through steps to remotely access her computer and then another male party came onto the phone and began asking her for personal identifying information.  The reporting party would not provide that information and she received notification that two electronic $50 Amazon gift cards had been purchased with the credit card she has on file with Amazon.  She contacted her credit card company and cancelled the card and also changed her password.  She was concerned that the individuals that had access to her computer may have compromised other information on her computer.   Officer Popovski advised her to place a fraud alert on her account and monitor her credit for any suspicious activity.

On July 3, 2018 at 3:26 p.m. Sgt. Lemenager was on patrol on Cedar Street and observed a female party walking up a driveway from a residence on Cedar Street.  Sgt. Lemenager was aware that the homeowners were away and made contact with the female party who was selling magazines door to door.  She was advised it was against the town by laws in Wellesley to solicit without a permit and if she wished to continue to sell magazines in Wellesley she would need to obtain a permit.

On July 4, 2018 at 5:40 p.m. Officer D. Popovski was dispatched to the Wellesley Country Club for a report of a possible break into a motor vehicle.  Upon arrival he spoke with the reporting party who stated he had observed a Toyota with a broken window. Officer Popovski noticed that the rear passenger window was broken and there was glass on the interior of the vehicle.   The vehicle owner was an employee at the Wellesley Country Club and stated that nothing was missing from the vehicle.  He suspected that the window had shattered due to the high temperatures.

On July 5, 2018 at 4:30 p.m. Officer DiCenso spoke with a male reporting party who stated that his bicycle was stolen from the Wellesley Free Library.  He stated that he placed his bicycle against a fence near the main entrance around 4:00 p.m. and when he returned it was gone.  The bicycle was not locked to the fence and was described as a black Trek.  Officer DiCenso has contacted the staff at the Wellesley Free Library to request any video surveillance footage for that time frame to potentially identify the individual who took the bicycle.

On July 6, 2018 at 12:47 p.m. the Wellesley Emergency Communications Center received a report of a house fire on Radcliffe Road.  The Wellesley Fire Department responded and extinguished the house fire with assistance of mutual aid.  The State Fire Marshalls Office was contacted and responded to assist with the investigation.

On July 6, 2018 at 4:30 p.m. Officer Fritts spoke to a female reporting party who stated that at 3:00 a.m. her daughter received 2 calls from an unknown number.  She stated she answered the 2nd call and a male party began making inappropriate remarks to her.  The reporting party stated she told the caller to not to call back and disconnected the call.  Officer Fritts provided her with information about the harassing phone call statue and how she could change her daughter’s phone settings to prevent blocked, unlisted or unknown callers from calling the cell phone.  There are no suspects at this time and the cell phone carrier was unable to provide any information that could be used to identify the caller.

On July 7, 2018 at 1:10 p.m. Officer Hughes was dispatched to Linden Street for a report of a cell phone being taken from a motor vehicle.  The report is incomplete at this time and no further information is available.