As part of its recently adopted Complete Streets policy, Wellesley is working to improve crosswalks to make them safer and more accessible for all and easier to maintain.

This includes those crosswalks on Linden Street, some of which are having their bricks replaced with stamped epoxy, similar to the decorative but smooth material you might be familiar with that’s in front of Roche Bros., and Citizens Bank in Linden Square.

Other crosswalks on Linden Street are getting the less glamorous white-paint treatment that require less maintenance and is compliant with the Americans with Disabilities Act (ADA).

The bricks, while lending a sophisticated air to the area, are also sometimes treacherous due to unevenness and degradation.

The new crosswalks should also make for quieter crossing by vehicles, something neighbors should appreciate.

The town installed the crosswalks in Linden Street when the area was redeveloped about 15 years ago, and their design was consistent with that used on Washington Street. The bricks have deteriorated to the point that they will be disposed of, according to the town.

Meanwhile, over on Washington Street in front of Smith & Wollensky, that phantom crosswalk has been re-blackened to let people know it’s really not a crosswalk. Hopefully, the black and gray shades will meld over time.

It was temporarily a crosswalk back in 2016 while work was being done on the Belclare condo/retail complex, and months later it was blacked out (“Swellesley cracks ‘The case of the crazy crosswalk'”). But that didn’t last, and drivers and pedestrians were back to being confused over whether it was or was not a crosswalk (a parking space is smack in the middle of it).

Let’s hope it stays blacked out this time, not that I’ll be able to break my habit of softly braking as I drive through it. 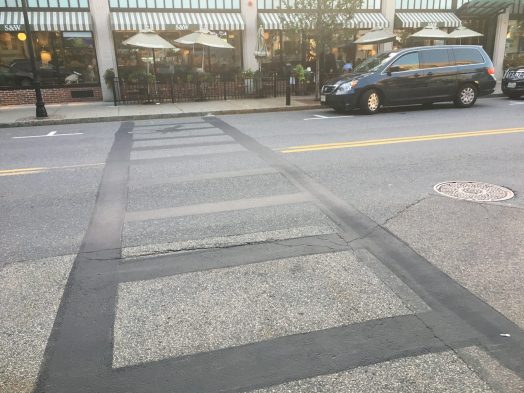