April is National Poetry Month and Wellesley can lay claim to, and should celebrate, three essential poets and writers: Wellesley High School (WHS) graduate Sylvia Plath; Anne Sexton, also educated in Wellesley schools; and Katharine Lee Bates, for whom Bates Elementary School is named. Throughout April, The Swellesley Report will touch on the accomplishments of these major creative forces. In their time these women were ground-breaking on the national international literary scene, today they remain relevant and should be recognized in town for their lives and work.

Sylvia Plath, Pulitzer Prize winner and author of The Bell Jar, which is perpetually in print, was one of WHS’s academic stars. She was a scholar who did everything Wellesley demands of its brightest students — she studied, got straight As, and was heavily involved in the town. She went on to a top school, Smith College, known at the time as a Seven Sisters college. Plath then became one of the most influential poets and leading writers of the 20th century, and her name today always appears on lists of of poets who changed the genre. She is considered a leader in Confessional poetry, meaning that which focuses on the individual. Think of today’s popularity of memoir — the dots of influence connect back to Plath.

The 1950 Wellesley High graduate’s life was bumpy, however. While home on break from Smith, she nearly died after ingesting a bottle of sleeping pills. Frantic neighbors joined the police in searching for the missing student. It was her brother who found her in a crawl space underneath her family’s 26 Elmwood Road home (protected as a single-building Historic District house, and thus not in danger of becoming a Wellesley tear-down…in fact, the house just changed hands). Plath spent time recovering at McLean Hospital in Belmont, Massachusetts. The Bell Jar is widely considered to be in part an autobiographical account of that time.

Plath took her own life on February 11, 1963 in a small apartment in the Primrose Hill section of London. With her two children in the next room sleeping, Plath turned on the oven, stuck her head into it, and died from asphyxiation by the gas fumes. She had sealed off the children’s room with tape to keep the deadly gas from taking them, too. The housekeeper was scheduled to come at 9am, and she did, just in time to save the children, but too late to save Sylvia. Whether Sylvia’s calculations worked out as she had planned depends on who you believe. Some say her attempt wasn’t serious, that she had timed it so that the housekeeper would come and save her, as well as the children. Others point to the plans she made, sealing the children’s room off and the effort that took. She almost took her downstairs neighbor with her. The gas had seeped into his apartment and he was found unconscious.

Sylvia lives on in Wellesley

There are still echoes of Plath throughout town, although she doesn’t get her true due. Now is the time to change that. But first, I’d like you to become better acquainted with this daughter of Wellesley. Here are some pictures related to Plath’s time at Wellesley High School:

In 1950 when Sylvia Plath’s picture appeared in WHS’s yearbook, The Wellesleyan, it was customary for the entries next to students’ names to start out written by the student’s peers, and finish up written by the student. So the parts that say, “Warm smile” and “energetic worker” and “clever with chalk and paints” aren’t Sylvia bragging on herself, but her friends’ pride in her strong points. When the entry flips over to Plath writing about herself, it’s interesting that she identifies as a “Future writer”, even though she had been published multiple times in the Wellesley Junior High School paper; the Wellesley’s Bradford Senior High School newspaper, The Bradford; and the Wellesley Townsman. Right after high school she scored her first major national publication in The Christian Science Monitor. Still, she felt the sting of those rejection slips from the glossy Seventeen magazine, a kind of monthly teen-age girl bible of its time. It also appears she couldn’t yet drive (“Oh, for a license.”) but like all teens, pined for wheels. 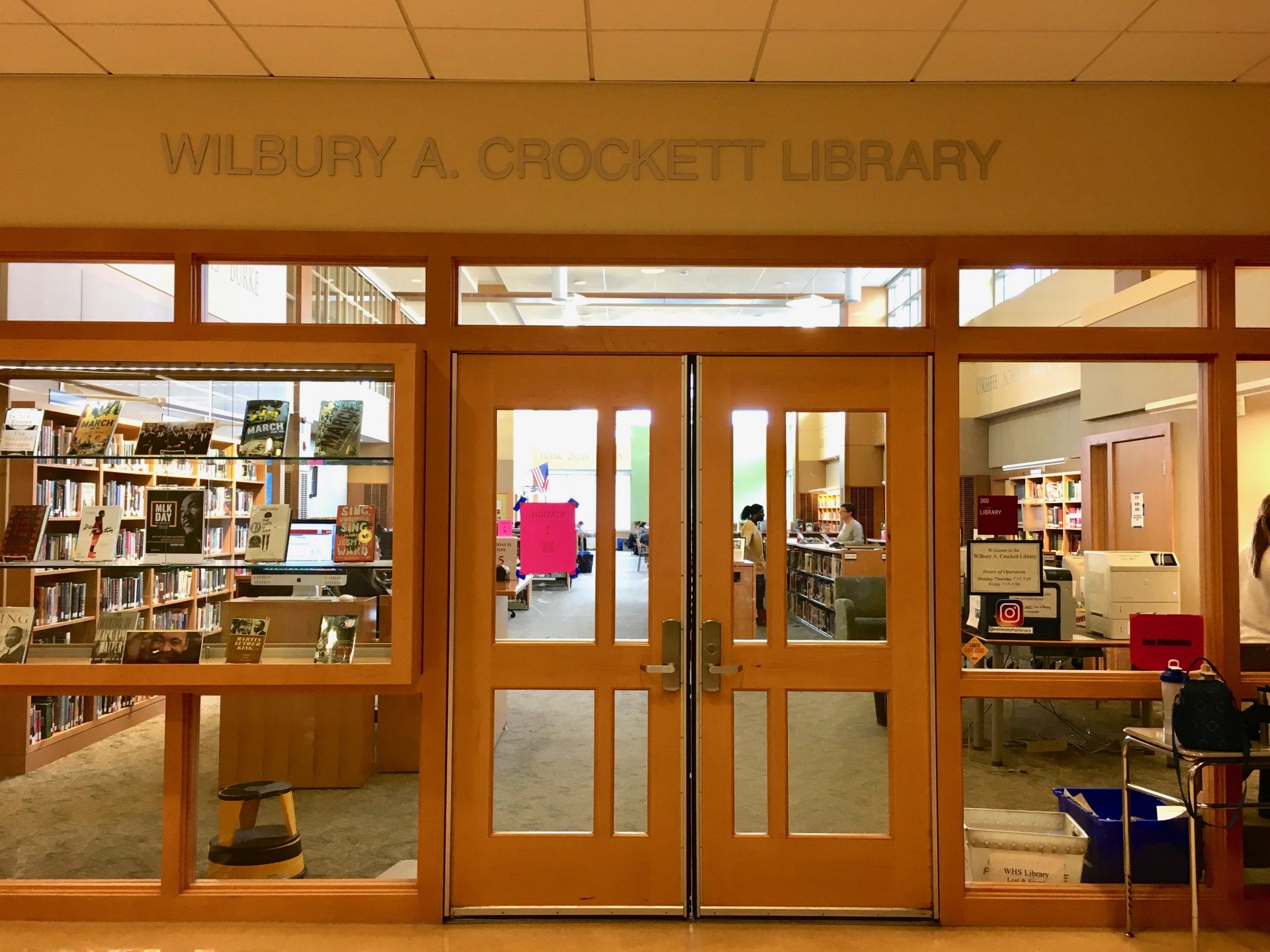 Plath identified WHS English teach Wilbury Crockett as “the teacher of a lifetime,” crediting him as instrumental to her own writing and the intellectual development of so many of her peers. In a framed picture outside the library is a quote from Plath that reads in part, “If we discovered abilities or interests we never knew we had, it was he who awakened us to them, If we made dreams become reality, it was because of his daily encouragement, unceasing inspiration, rare wisdom, and insight.”  The area outside the library currently serves as sort of Sylvia-central, the place where Wellesley recognizes its famous graduate. It’s nice enough, but the area is readily accessible only to WHS students, faculty, and staff. The high school administration allowed me in to take pictures, but I’m no mystery person around there. I doubt a stranger on a Sylvia pilgrimage would be welcomed into the school just to check out Plath historical items. Today’s realities demand that schools make sure they know exactly who is going in and out of the building.

Sylvia, where are you?

That’s why it’s time to add recognition for Sylvia outside the school walls, perhaps in the form of a street name in the Poet’s Corner neighborhood, or a plaque affixed to the front of her childhood home. If the current owners would rather not have a plaque on their house perhaps a bronze marker could be installed on the sidewalk in front of the home. Maybe we need a “Plath Path” in town, a quiet and contemplative spot with a bench engraved with a Plath quote. “I took a deep breath and listened to the old bray of my heart. I am. I am. I am,” comes to mind.

Plath was imaginative enough to write some of the most powerful poetry of the 20th century. Wellesley should be able to come up with some viable and creative ways to mark that not only did Plath live in Wellesley, but Wellesley helped produce this poet with a work ethic and the intellectual gifts that brought her worldwide acclaim.

The Advisory Committee has been asked to consider formal recognition of Plath, and the Board of Selectmen appears open to considering the matter once Town Meeting is finished.

Wellesley College is bringing poetry from 29 Wellesley students, faculty, staff, and alumnae to the four lines of the MBTA (if the MBTA has four lines, does that make the T a quatrain?) with a collaboration with Mass Poetry. Here’s a playlist of readings of those poems by the authors). There are readings and performances open to the public, and the culmination is a full day of events on campus celebrating poetry on April 26.
print