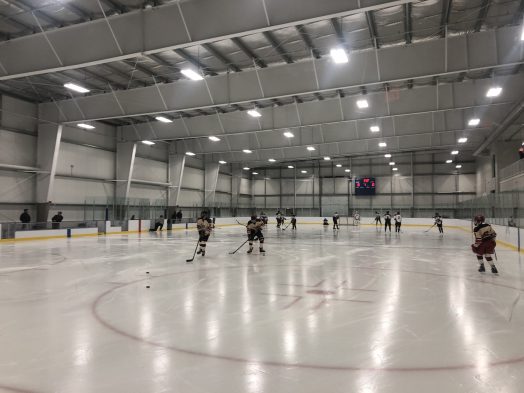 I’m not sure if I’m a worse swimmer or skater, and I wasn’t about to find out during my first visit to Wellesley’s new athletics mecca, the Boston Sports Institute at 900 Worcester St.

On a late September day with temps hitting 80, this probably wasn’t parents’ top choice of places to be, but plenty of kids looked to be having fun swimming and playing hockey in pristine conditions. I happened to be in the area, so decided to take a spin through, especially since emails from Swellesley readers antsy about pricing and other details have been piling up of late. Not to mention I had the space in mind after reading about its main sponsor’s financials earlier this week. 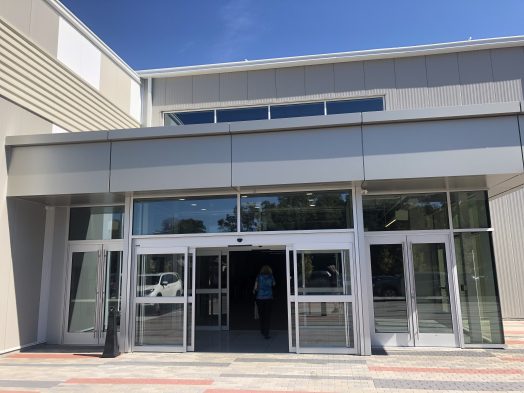 The 130,000 sq. ft. Rte. 9 behemoth has a welcoming entryway and I was pleasantly surprised not to be accosted by anyone trying to sign me up for this or that when I stepped in. I was able to amble about and check out the facilities at my own pace. The facility’s main hallways are roomy, and were especially so this day with what I suspect was a smaller-than-usual crowd on hand. I can envision a bit more of a hockey bag obstacle course feel as we head toward winter. 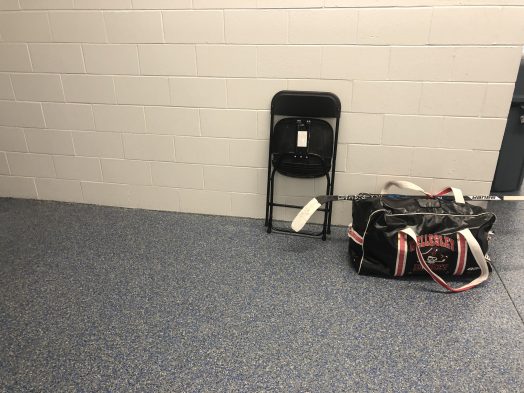 900 Worcester St. is the former site of St. James the Great Catholic Church, which was officially shuttered by the Archdiocese of Boston in 2004. The Town of Wellesley paid $3.8M for the 7.85 acre property in 2012 with the idea of using it for recreational purposes. 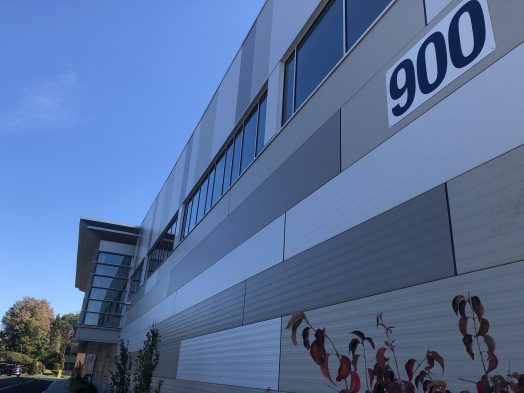 One hockey rink, bearing the Wellesley Raiders logo, was getting spit polished by a Zamboni, with a smattering of people in the bleachers awaiting action. Local youth and school hockey programs get preferential treatment at the rinks, but opportunities for adults to play hockey and skate are available, too. A video screen shows the updated schedule in one hallway.

Over at the other rink, which has a veranda and ice-level standing room for fans, a Wellesley Youth Hockey team with national ambitions faced off against its rivals in a game. I ran into one WYH mover and shaker—a coach, player and hockey dad who confirmed this being his home away from home. While his Cheesy Street Grill selection looked tempting, I passed on a second lunch and continued to roam. 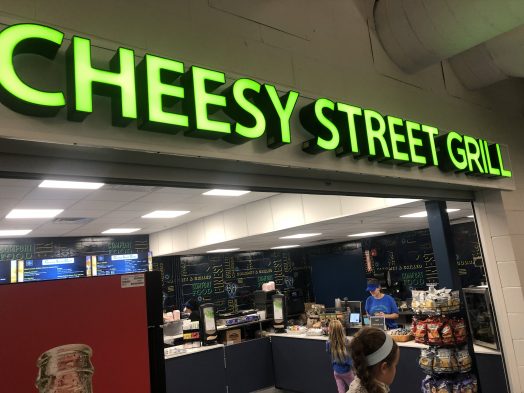 From the chilly-though-not-frigid rinks I wandered over to the warm-though-not-stifling swimming pool viewing stands. Dozens of swimmers splashed up and down the lanes, looking to be all business. Wellesley High and other swimmers have begun to use the pool, which supporters of the facility are quick to tout as having Olympic pedigree.

Lap swimming’s available at $10 a pop, a price some have grumbled about as making it more expensive than even local luxury venues. We’ve also heard complaints about the lack of pool memberships and lap swimming only being available until 5pm or 5:15pm. (“This was discussed as possibly being a problem at the town meetings when the early discussions about the project were happening and the selectman ensured people this would not happen,” wrote one reader who planned to complain to the town.)

A host of swim programs are also being offered at the sports center for kids and adults, including masters. We suspect the pool operator will adjust choices based on demand, so be sure to speak up. While the pool has been a long time coming, it’s still early for the business operations. 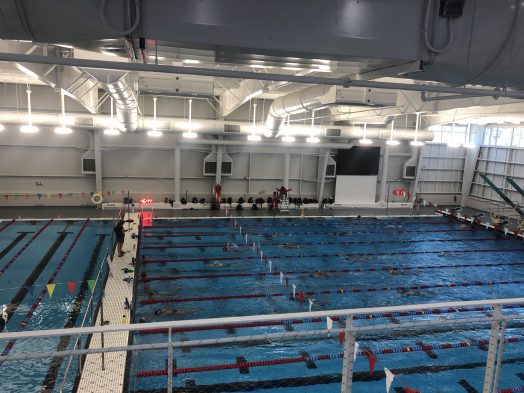 Numerous flyers and a video screen promoted available programs, including synchronized swimming for ages 7 and up, indoor lacrosse leagues on weekends and weeknights for all ages and ability levels, learn to skate and play hockey. There are chances for the general public to check out the rinks for open skates on weekday, weeknight and weekend hours ($10 per person, $5 skate rentals).

Upstairs I checked out the view from above of the rinks as well as the narrow track that circles above the turf playing field, where a man and young boy kicked around a soccer ball. More space remained under development for fitness and other purposes. 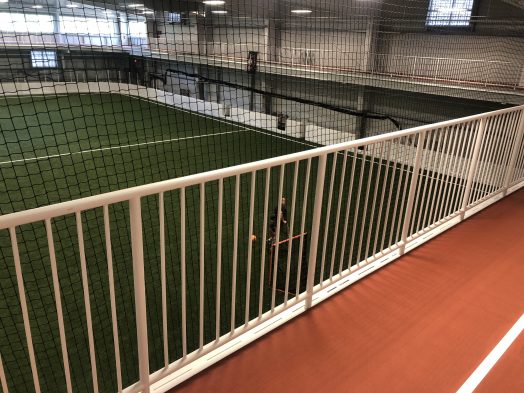 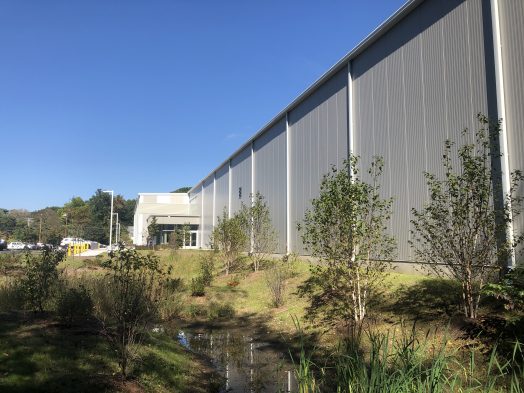 Before I finished my tour, I took a lap around the building, which is surrounded by wetlands, an office park and a dead-end street. We know not everyone is a fan of the outside look, but hey, it’s no church (well, maybe that could be debated by hockey players).

I was curious about the parking lot, about which one Swellesley reader wrote: “For some reason, the parking spots there are TINY. They barely fit BMW minis, let alone the SUVs that hockey parents drive.”

I happen to drive a small hatchback and found the spots roomy enough. Even the many large cars in the lots mainly fit neatly between yellow lines.

But then I noticed the Compact Cars Only spots.  I had to roll my eyes when I saw a row of 4 humungous SUVs and 4×4 pickups, some with Bruins vanity plates, crammed into and over these tighter spaces in front of the building.

Then again, some of those hockey parent vehicles do pass for compact around here… 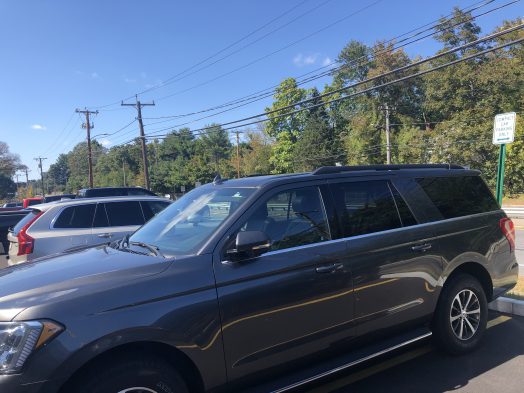