It’s been over two years since Upper Crust served up its last slice of pizza at 99 Central Street in Wellesley Square before the place went dark for good. With the soft opening this week of La Toscana’s, it seems clear that pizza is in the very DNA of the storefront space, situated across the street from the fire station. During a weekday lunch visit, the long, narrow, brightly lit dining area offered seating for 16 at five tables. Customers ordered slices, whole pies, salads, and smoothies—some dined in, some took their food to-go. Curious passers-by popped their heads in to take a gander at the place that moved fast to open within three months of getting the Select Board’s thumbs up. 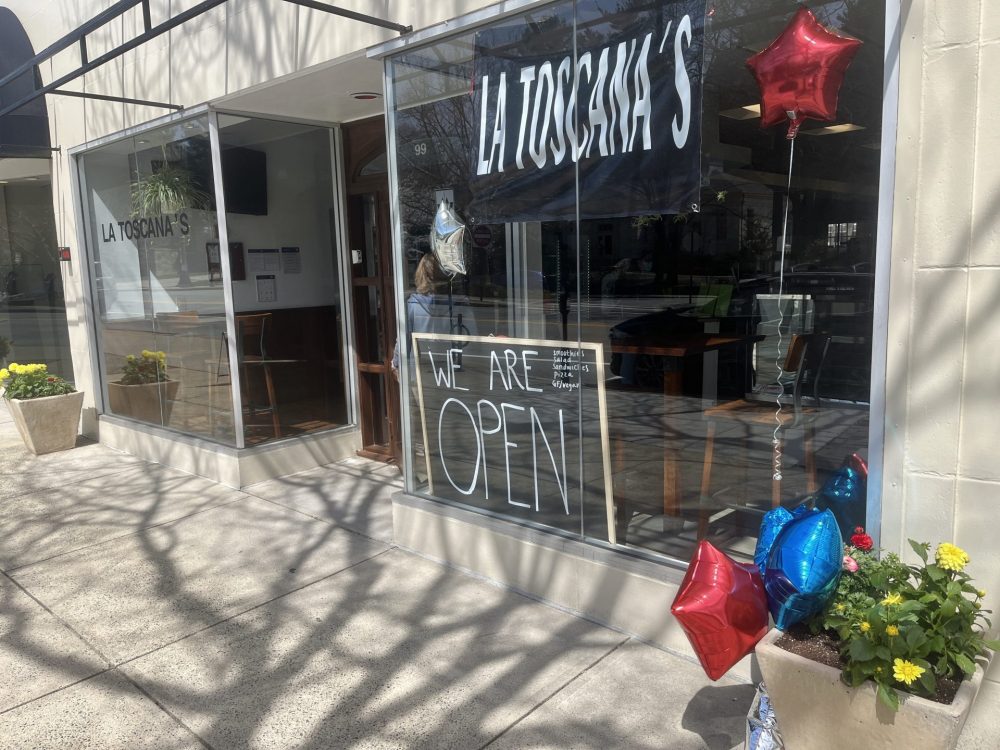 We tried out the cheese pizza, reasoning if they can do the classics well, that bodes well for the rest of the menu. The pizza comes into the world in the usual way. The in-view kitchen staff first rolls out the dough with a wooden rolling pin on a stainless steel table scattered with flour, in the service of making a thin-crust pizza with a crispy, but not charred, outer edge (purists know that edge as the cornicione). From there it’s popped into an industrial pizza oven for ten or so minutes.

Served to our table piping hot on the universally recognized sign for pizza, a round metal tray, and elevated on a serving stand,  the red sauce had a nice tang to it, and the cheese sang beautifully in four-part harmony. That cornicone was crunchy perfection, and anyone who leaves it behind should be banned from ever eating pizza again.

Diners seeking something beyond the simplicity of a cheese pizza can have La Toscana’s create a dream pie from a list of 25 toppings including ricotta cheese, sun-dried tomatoes, portobello and shiitake mushrooms, Calabrian peppers, olives, and bacon.

With a choice of six salads, it’s easy to get in your veggies here. The simple green salad ($13) worked for us with its mix of  romaine, spinach, and cherry tomatoes, topped with a sprinkling of parmesan cheese. The dash of microgreens was a nice high-end sort of touch, easy enough to omit on the grounds of “too fancy,” but also easy enough to make happen. We were glad for such lunchtime pampering. Balsamic dressing was served on the side. We overheard an employee from a nearby business raving over her salad, complimenting the staff on the fresh ingredients and nice presentation.

Additional menu items include short ribs lasagna and vegetarian lasagna, as well as sandwiches. We had the Balsamico ($9.99) with chicken breast, mozzarella, roasted red pepper, pesto, and balsamic vinegar, which was good-sized and had a nice balance of the listed ingredients. Some other sandwich choices include meatball, hot buffalo chicken, and tuna salad.

A chalkboard boasts a roster of 15 or so smoothies, some fruity, one kale-based (can’t ever forget the kale, right?), and some spiced with a taste of cinnamon or tumeric. Our coconut mango smoothie was a thick, refreshing, and happy-looking citrus delight. For $10 ($1 more to add in protein powder) we got a 20-ounce serving, which is the sole option and which seems way too supersized to us. We don’t see ourselves sipping our way through the smoothie menu until a smaller size becomes an option.

La Toscana’s is strictly a casual place. Nobody’s putting on fine-china airs here. Come as you are for good food served on paper plates, with plenty of paper napkins to keep it tidy. Utensils are plastic, trussed up in a clear plastic cocoon, waiting to be ripped open and called into service. There’s a selection of canned and bottled sodas and juices you can grab from the cooler. No messy self-service soda guns here. The lighting is bright and functional, and there are warm wooden accents throughout from the ceiling to the vintage schoolroom-style chairs.

The background music and the two flatscreen TVs weren’t yet up and running, but will get hooked up soon. Owner Paul Boucher, whose A New Leaf healthy food grocery has been operating in Needham since 2004, has put his energies in opening the doors and getting the food served. Fine-tuning the dining experience to happen bit by bit.