Lovers of North Shore roast beef sandwiches are passionate about their delicacy of choice to say the least. This goes way beyond Kelly’s Roast Beef in Revere to sandwich shops in many surrounding communities with names like Anthony’s, Bella’s, and Zeno’s. A private Facebook group dubbed “North Shore Beefs” boasts 30,000-plus members, and if your sandwich reviews or photos fall short, you’ll get eaten for lunch.

That’s what makes the ascension of Mark’s Pizza & Subs of Wellesley (10B Washington St./Rte. 16 east) into the upper echelon of roast beef sandwiches for this crowd so amazing. There’s nothing more that many here would like than to dump on Wellesley as a possible source of beefy bliss, but their stomachs and taste buds have overruled.

Mark’s, owned by Jackie & Ramez Ghobrial, has earned its cred among some tough critics. The couple initially discovered the popularity of roast beef sandwiches when serving them at a restaurant they owned in Salem, N.H., just north of Andover, Ipswich and other North Shore beef hotbeds. They started “slinging heaters,” to use North Shore Beefs lingo, in spring of 2020, not long into the pandemic.

Word started to waft up north that something special was being served in town, and that the shop owners were only too eager to take feedback and improve upon their 3-Ways. “We ask about what’s wrong. We listen to what they say. They know what they like,” Jackie says.

A 3-Way has precise ingredients: Mayo, American cheese, James River BBQ sauce, pink (no gray or fat!) roast beef, all on a buttered and toasted onion roll (depending on which size you order). Junior, Big, and Super (12 oz. of beef) sizes are offered, ranging in price from $10-$12, a bit higher depending on what you want on it. A 4-Way includes an onion ring inside the bun and a 5-Way features both the onion ring and horseradish.

Jackie’s reluctant to give away Mark’s secret approach to preparing these sandwiches, but she says roasting the beef over a very low temperature is key. Mark’s has been going through as many as four 18 lb. cuts of inside round roast beef per day, she says. Sales of roast beef sandwiches have doubled, then quadrupled, as Mark’s popularity has increased among the North Shore Beefs crew and beyond.

How does Jackie know many visitors come from the North Shore? “They ask for the 3-Way. It’s not listed that way on the menu,” she says.

When summer rankings were released on the Facebook group, Mark’s was up to #5 on the list with an average rank of 9 on a 10-point scale. 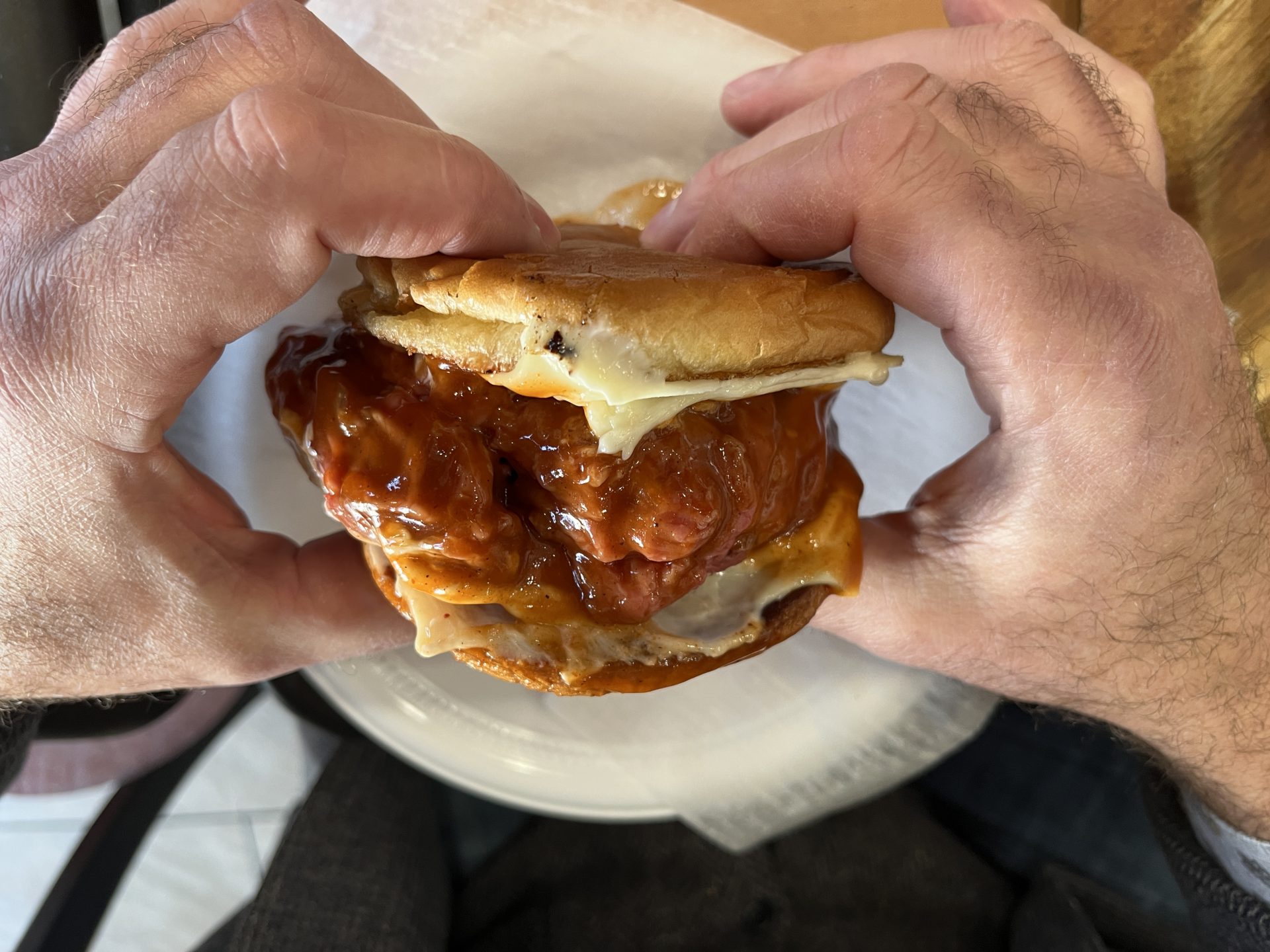 Among those sharing reviews of Mark’s and other roast beef sandwiches on the North Shore Beefs group is local Haig Tellalian, who encouraged me to join him for a mid-afternoon feast at Mark’s that qualified as whatever comes between lunch and dinner. Mark’s was doing a brisk business at the location opened in 2019 following the teardown the year before of its former site nearby.

Haig’s a regular there, and had been saving his appetite all day long for our meal. Not only did he order a 3-Way sandwich, but a 3-Way pizza that boasted several of the same key ingredients. 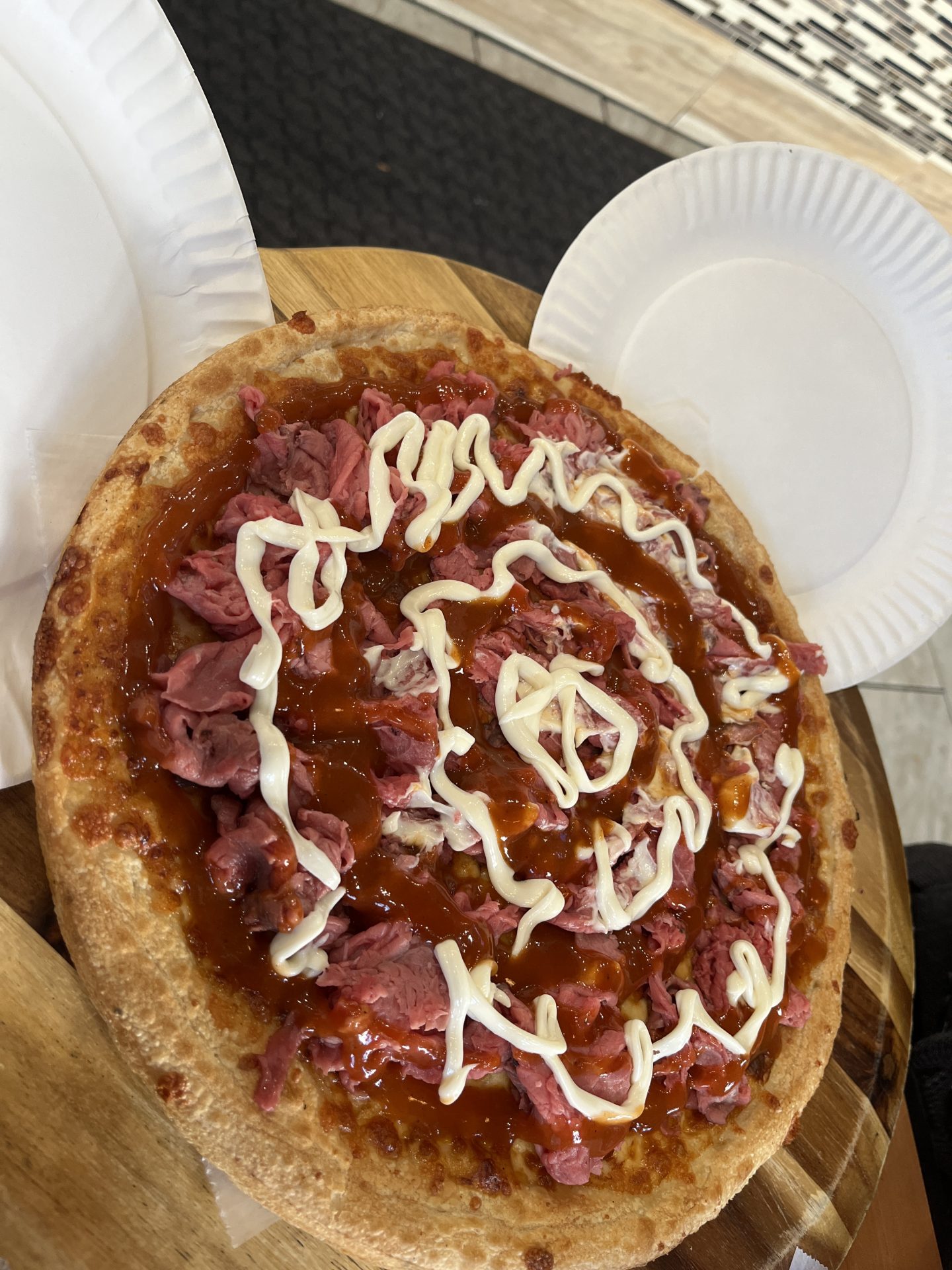 Because I’m a food baby, I went with a custom No-Way….no mayo, no sauce, no onion roll. But the roast beef was sloppy and delicious. I was warned that I’d be eaten alive for my lack of toppings if I ever posted a photo of my sandwich on North Shore Beefs.

Haig’s first reaction to his decked-out sandwich was “satisfyingly tender.” After soaking up gobs of napkins with his saucy fingers, Haig tapped an instant review onto the North Shore Beefs site from his phone:

Another amazing beef at Mark’s Pizza in Wellesley!<
Junior three-way, plain roll by default (am I supposed to request onion?)Side of small 3-way pizza and a water.
TOB 315
Ate in
Good crunch on bun
Pink and warm
8.9 would have been a bit higher but I was an idiot not to ask for the onion roll
Moments later he got his first reply: Good luck with the comments coming…

Haig sent a last-minute invite for North Shore Beefs’ Andy Ferg to join us, which he couldn’t. But Ferg did share his enthusiasm for Mark’s.

“I’m thrilled that my favorite sandwich is making its way out of the geographical north shore. I’ve always said the North Shore Beef is a sandwich, not a location. Mark’s is a great example of how anyone who cares to give a s*** can execute the BEEF like a pro. It’s such a simple sandwich but each ingredient is important.”

Words to eat by.