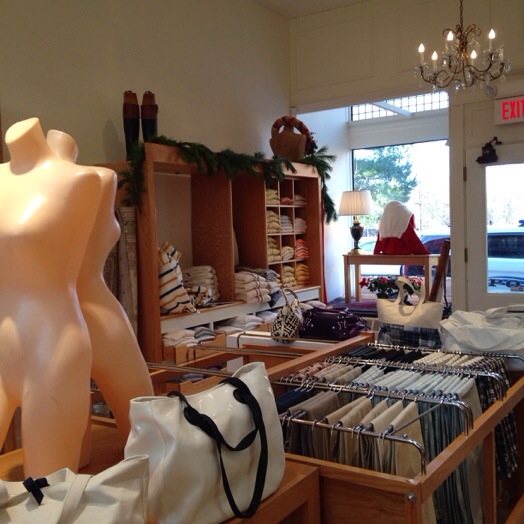 The Haberdashery, the European men’s and women’s sportswear shop that we mentioned over the weekend is setting up shop at 22 Church St., in downtown Wellesley where The Triangle Shop used to be.  It isn’t officially open yet, but the door was ajar, and I’m not shy, so I smiled pretty and they let me in on Tuesday afternoon.  The owners hope to open ASAP for just plain anybody, smiling or not, and plan to do so initially under the name of HOP, an acronym for Haberdashery Off Price.

That means that the $1,300 blazer that would look so nice on my husband would cost a mere $675.  So look at the price, slash it in half, and walk out with your bargain.  Alas, I was there as a mere tire-kicking journalist, but soon, an actual customer came in and started talking labels and Euro-style with the best of them.  Perhaps she walked out with that waffle-weave bag she was admiring.  Although not really open for business, it didn’t look like business was being turned away.

Here’s the thing:  they need staff who can engage customers in such discussions.  So when your college student is home on break or your fashion-loving friend with even a modicum of retail experience is looking for employment, send him or her over to talk job possibilities.

For the first few months, the store will be known as HOP.  That will be the time to get your bargains while the getting is good, because in March they will close for 3-4 weeks to seriously spruce up the interior.  After it gets its face lift, the store will reopen as The Haberdashery, in all its full-price splendor.

The Haberdashery also has locations in Nantucket, Osterville (on Martha’s Vineyard), and Palm Beach.